Home News 6 houses destroyed in a fire in Nabua 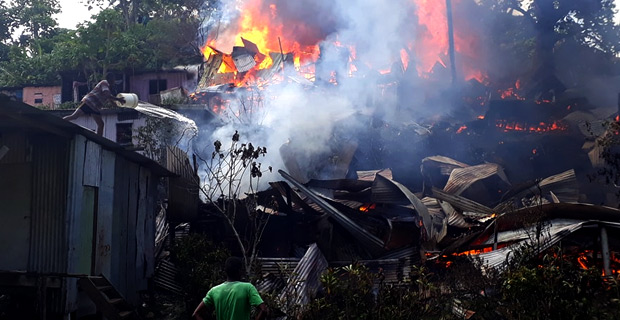 Updated: 6:07am – It is a bleak Diwali for six families who lost everything in a fire that destroyed six houses at the Suva Muslim League settlement in Nabua yesterday afternoon.

The fire started in one of the houses in the settlement just after 2pm yesterday.

The first house was vacant at the time.

People living in nearby houses then evacuated the area.

When firefighters arrived at the scene, it was difficult for the fire trucks to reach the area.

However they managed to extend the hoses to reach the affected area.

Some boys also went on the roof of one of the nearby houses and were throwing buckets of water to try to stop the fire from getting closer to their house.

The National Fire Authority officers and residents managed to control the blaze at about 3.30pm.

One of the home owners, Nirmala Lochan says she was in Suva City doing Diwali shopping when she was informed that her house was on fire.

Lochan told that she rushed home and also forgot her things in the bus.

Meanwhile one of the residents, Marika Waqanibau says he was sleeping when he heard one of the neighbours calling out for help.

He saw the house was on fire and the strong wind caused the fire to spread quickly to the other houses.

Waqanibau went on the roof and started throwing water on the burning house.

He says luckily no one was injured in the fire.

The cause of the fire is not known at this stage.

US military urged to be open about Marianas firing ranges