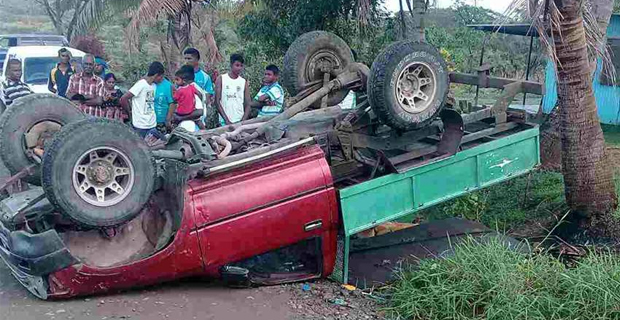 UPDATED: 7:20am – A 8-year-old boy is in serious condition in hospital after a road accident in Solovi, Nadi Sunday morning.

A 15-year-old boy and his father have been questioned at the Nadi Police Station following the horrific accident.

Police say the victim was riding at the back of a truck that was driven by his 15-year-old brother.

It is alleged that the 15-year-old was instructed by his father to drive their truck and pick up an item from a relative’s home located 3 kilometres away from their residence.

Police Spokesperson Ana Naisoro says on their way they allegedly picked up their 19-year-old cousin with the 8-year-old jumping to the back of the truck.

Naisoro says the 15-year-old allegedly lost control of the vehicle which went into the drain before tumbling onto the road trapping the 8-year-old underneath the vehicle.

She says the 8-year-old is now admitted at the Lautoka Hospital in a critical condition.