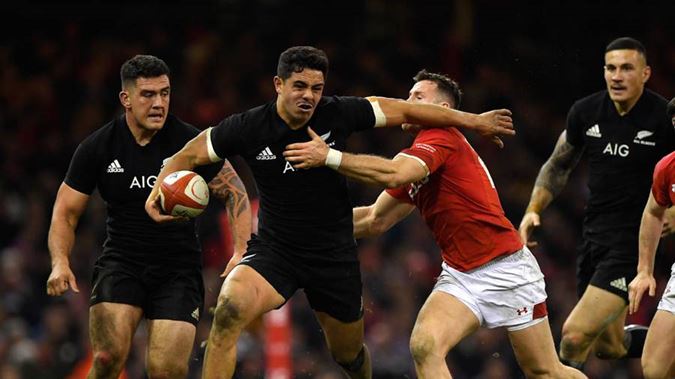 Updated: 10:15am – It wasn’t quite definitive or emphatic, but the All Blacks closed out their season with a strong, resilient and at times clinical display that would stack as their best 80 minutes in Europe.

It was a performance that had patience and character at its core rather than high end creativity. It was a game fought and won in the trenches such as the bruising nature of it all.

Wales carried hard and had to be subdued. They tackled with a bit of venom, too and had to be worked out the way, manually shifted with nothing classier than old-fashioned grunt work.

It was the defensive work of the All Blacks, though, which provided the real biting point: the critical edge. It was one of those team efforts where everyone worked together, the first man chopping the ball carrier low the second looking to wrap the man or steal possession.

And that’s what the All Blacks gave: sweat and toil, good honest labour at the collisions and they gave it slightly better and for slightly longer than Wales and hence gave themselves the chance to win.

Or rather, they gave Rieko Ioane a chance to win it for them. The 20-year-old was quite sensational. He made a try out of nothing for Anton Lienert-Brown and then cruised for 40 metres for one of his own simply because he had the pace and the timing.

The other plus points for the All Blacks was their discipline which was excellent for most of the game, until Sam Whitelock was harshly yellow-carded when he appeared to have entered the ruck legally and stayed on his feet.

That gave the All Blacks a tense last 10 minutes but they had a solid buffer thanks to a two-try blast midway through the second half.

The game was stuck in that first 10 minutes after the break and needed to be broken up.
The All Blacks slowly turned the screw, built the pressure, held the ball for longer and then as only they can, showed the clinical precision to put 12 points between the two teams.

It was a lesson for Wales in how to finish and in that respect if felt a little like the previous week had been repeated – that the All Blacks had weathered more pressure than they would have liked but won the game on the back of lightning, precision strikes.

Certainly the first half was eerily similar to the previous week in Edinburgh. Just like the Scots, the Welsh dominated territory and possession in that first 40 minutes and like their Celtic cousins, they too failed to convert their pressure into points.
Much of that was down to a much improved disciplinary effort by the All Blacks. They defended for long periods without conceding any penalties – a rarity in modern rugby where referees seem to assume that they should whistle for an offside or spurious infringement if the attacking team holds the ball through numerous phases without finding much space to attack.

But the penalties didn’t come for Wales and nor did the space and they plugged away without as much cutting edge as they would have liked.

They recycled the ball well, shifted it through the hands sharply, ran good lines but they couldn’t do enough to really put the All Blacks into panic mode – not until they superbly played left wing Steff Evans through a gap in the midfield and Scott Williams was able to finish it off just before half time.

The quality of the All Blacks’ defence was an obvious sign that the coaching staff had laid it on the line – that things had to improve from where they had been in Paris and Edinburgh.

It wasn’t that the All Blacks fell off tackles in their first two games – they were guilty of needless offsides, ill-discipline and at times an almost reckless need to illegally throw themselves into the foray to make their presence felt.

With that tidied up, there was no easy in for Wales and they were well beaten in the end.

Featured image: Anton Lienert-Brown was a stand out player for the All Blacks as they capped the year off with another win. (Photo/ Getty)

Coles out of Bledisloe after new head knock | NZ FIJI...