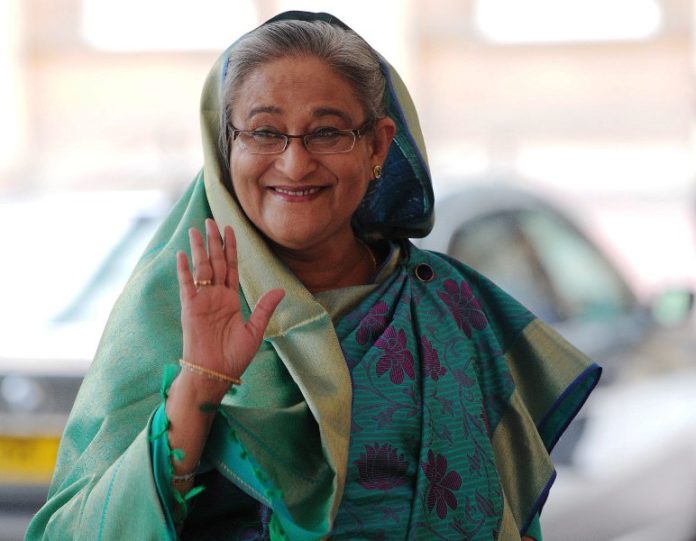 Updated: 10:10am – In a marked humanitarian initiative the Bangladesh government will rehabilitate Rohingyas over a 2,000 acre land in Cox’s Bazar’s Ukhia upazila, Prime Minister Hasina Wajid announced in Coc’s Bazar on Sunday This measure is to the much relief of the international community who was much worried over the inhuman treatment of Rohingya community in Burma, Talking to this scribe here Saturday said.The current piece of land is in Kutupalang area of Ukhia, the area of Cox’s Bazar district bordering Myanmar.

Minister assured of allotting more land if necessary.
“We will allocate more land in the area if necessary,” Prime Minister Hasina Wajid said while talking to reporters at his secretariat office in Dhaka this afternoon.The exodus of Rohingyas is nearing 300,000 according to estimates of the United Nations. The UN has already appealed for USD 77 million emergency funds for Rohingya support. UNO has launched a separate appeal for aiding uprooed Rohingyas reaching over 30000.

Worldwide, rights groups are pushing Myanmar to cease violence in the Rakhine state. Bangladesh has repeatedly urged the Myanmar government to take back the Rohingyas.Apart from providing shelter and support, Bangladesh is also taking precautionary security measures to prevent refugee crimes including biometric registration.
Biometrically unregistered Rohingyas will not be allowed any support or board any transport within Bangladesh’s territory, Prime Minister said in the relation to registration.

Meanwhile, President M Abdul Hamid sought OIC members’ intervention in protecting Myanmar’s ethnic minority Rohingya Muslims, saying repeated atrocities threatened their existence at home simultaneously exposing Bangladesh to great difficulty with burdens of huge number of hapless refugees.
“Bangladesh has given shelter to Rohingyas on a humanitarian ground,” he said while addressing the opening ceremony of the First Summit on Science and Technology of the Organisation of Islamic Cooperation (OIC) at the Palace of Independence at the Kazakhstan capital here.He added: (But) I would like to draw your kind attention to the need for protection of the Rohingya Muslims, deprived of all rights, including citizenship, and faced with existential threat at repeated atrocities and displacements.”
The president said the Rohingya crisis “directly affected” Bangladesh as atrocities there forced the victims to flee their home in Myanmar’s Rakhine state while surges of refugees flooded territories in the neighbouring country. President Hamid stressed the need for a collective effort to protect rights of this minority Muslim community in Myanmar.
The science summit drew the heads of nation and government of OIC nations to the Kazakh capital where the Bangladesh president also underscored the need for collective journey in Science and Technology to reach the Muslim world on a vantage ground of technology leadership in place of mere technology users. The president said advancement of technology and innovation particularly in 21st century were rapidly transforming society bringing greater ease in work and communication, drastically reducing time and space barriers, and increasing speed and productivity.
He said nations with varying level and stages of advancement in technology are competing with each other to keep their technological edge and superiority simultaneously creating a technological divide.”Disruptive innovations are leaving some behind and taking some ahead creating another divisionin the world,” president Hamid observed.
The Bangladesh president called for adopting a scientific view of life, to bring back the intellectual leadership in science which the Muslims once enjoyed through investment in pursuit of knowledge and exploration.

He urged OIV nations to engage in coordinated and dedicated research and development, applying new innovations in all areas of life and quickly adapting to technology to achieve to restore the leadership.”I believe, our cooperation in science and technology would generate more synergy and dynamism for the Ummah and enhance the image and standing of the Muslims in the world,” the President.

He said the OIC nations simultaneously “must also involve, to our advantage, Muslim scientists, researchers, and innovators flourishing in the developed world for research and development and industrial collaboration”.

He described science and technology as a “game changer in poverty alleviation and development” and proposed joint plans of action for selecting, using and tasking institutions in the member states in the field of research and development in collaboration with OIC institutional support.

In Bangladesh, he said, Prime Minister Sheikh Hasina’s Vision – ‘Digital Bangladesh’, made enviable advancement in life sciences which was evident in the country’s emerging industry of pharmaceuticals and alternative medicine and high-tech industries like ocean-going shipbuilding.

Barclays Bank in London to launder money and dodge sanctions