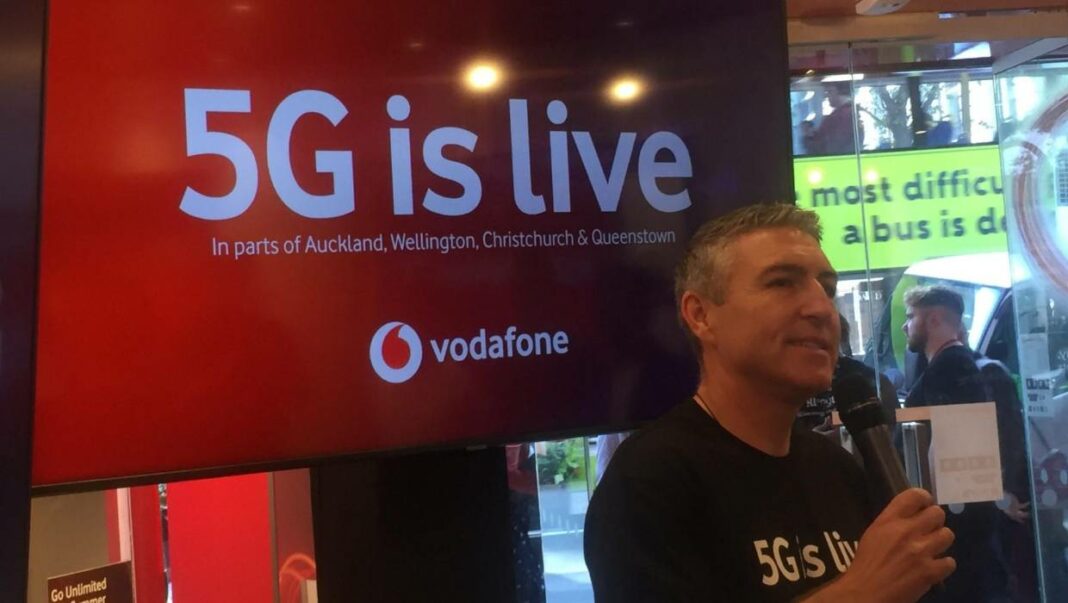 Vodafone has turned on its 5G mobile network on 100 cellsites in Auckland, Wellington, Christchurch and Queenstown.

But customers will only be able to use the upgrade free until the end of June, after which a $10 monthly surcharge will apply, and most would need a new smartphone costing $1399 or more.

Paris had said in August that Vodafone planned to charge a premium for 5G.

But its ability to make a consumer surcharge stick is likely to be closely watched.

Vodafone had spent more than $50 million on its 5G network so far, and that would increase to “many hundreds of millions” when upgrades to its 4G network were included, Paris said.

“We will see what the market decides. But we think it is great value for money.”

Vodafone also charged customers on all but its most-expensive mobile plans a $10 monthly premium for 4G when it launched that technology in 2013, but it ditched the premium the following November after Telecom, now Spark, launched its own 4G service.

Former Vodafone chief executive Russell Stanners said last year that the company – then owned by the British-based Vodafone Group – was not rushing to be first with 5G, noting a general expectation from telco customers that they would continually get more for the same price.

But Paris said in August that 5G launches by Vodafone Group in the UK, Germany, Italy and Spain showed customers were getting big benefits from using 5G for gaming, and in conjunction with wearable devices.

Vodafone NZ, which is now owned by NZX-listed Infratil and Canadian investment company Brookfield, has been able to get a jump start in 5G as it owns a chuck of spectrum in the 3.5GHz band that is currently best supported by handset manufacturers.

The Government is exploring ways to allow mobile network operators to get early access to more 3.5GHz spectrum before existing rights in the band expire in November 2022.

But that process is understood to have been held up by negotiations over a Waitangi Tribunal claim by Māori.

Communications Minister Kris Faafoi is likely to agree to gift Māori a chunk of the spectrum, industry sources said.

Faafoi responded that the Government was still working towards a decision on 5G allocation and what form that allocation might take.

“Decisions shouldn’t be too far away and will also include how Māori spectrum claims, under the Treaty of Waitangi, might be addressed,” he said.

The main use for 5G in the short term is expected to be in providing improved fixed-wireless connections, with large data caps, for customers who are willing to use wireless broadband as an alternative to copper-based and ultrafast broadband.

But over time, 5G is expected to enable the development of a wide variety of new, low-latency communications services, thanks to its ability to support computational intelligence at the edge of the network, close to customers.

“If 4G was the era of the smartphone, 5G will be the era of ‘connected everything’.”

The Police and Hamilton artificial intelligence company Aware Group were showing 5G could have real-world benefits, he said.

Police discussed a drone on Tuesday that could take 4K video footage and feed that live to officers on the ground.

“While drone footage over a 4G connection is useful, with a 5G network connection the quality improves dramatically meaning we can scan the environment allowing a faster response,” police chief information officer Rob Cochrane said.

Aware Group has been developing a 5G-based service for retailers that allows them to “heat map” how customers are interacting with products in their stores.

Vodafone NZ’s next challenge would be integrating the billing systems it had inherited from its acquisitions of TelstraClear, Wordlxchange, ihug and Farmside, dating back to 2012, Paris said.

“We have never consolidated those IT stacks from four into one … we are still challenged as we have got our customer data spread over four stacks.

“But there is now modern cloud-enabled technology available that should be a ‘game changer’ from a customer experience perspective.”