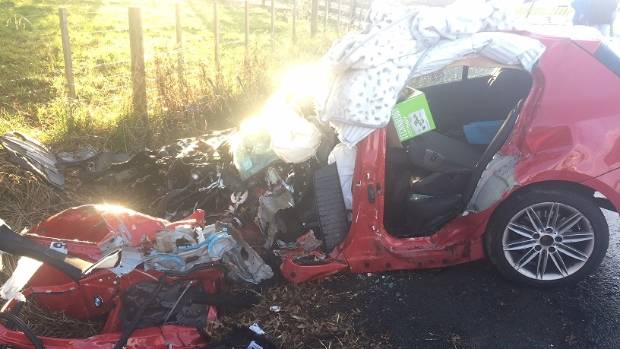 Updated: 5:15pm – A father and his two children have been airlifted to hospital after a multiple-vehicle crash, involving seven people, in Mangatarata, Waikato.

Police said a small truck and a car collided on State Highway 2, just before 3.50pm on Saturday, leaving the truck on its side in the southbound lane. Another car was involved in the incident, but police weren’t yet sure how.

Emergency services rushed to the scene, including the Whitianga-based crew of the Auckland Westpac Rescue Helicopter.

Pilot James Tayler said they flew a father, his son and daughter to Waikato Hospital with varying injuries.

The boy suffered suspected multiple injuries, including a broken arm, and was deemed to be in a serious condition.

His dad and his sister suffered minor injuries, including whiplash and seatbelt abrasions. Tayler said the rescue was a straight forward one.

“By the time we landed the other emergency services had extricated the three people from the vehicle.

“They’d done a very good job at the scene which meant it was quite easy for us to check the patients were stable and fly them down to Waikato.” The other four patients, who escaped injuries, were transported to hospital by St John Ambulance.

A police spokesperson said contractors were called to deal with some oil spillage. The road was opened to one lane at 6pm.

Featured image: The dad and his children had to be freed from the vehicle before they were flown to hospital. Auckland Rescue Helicopter Trust