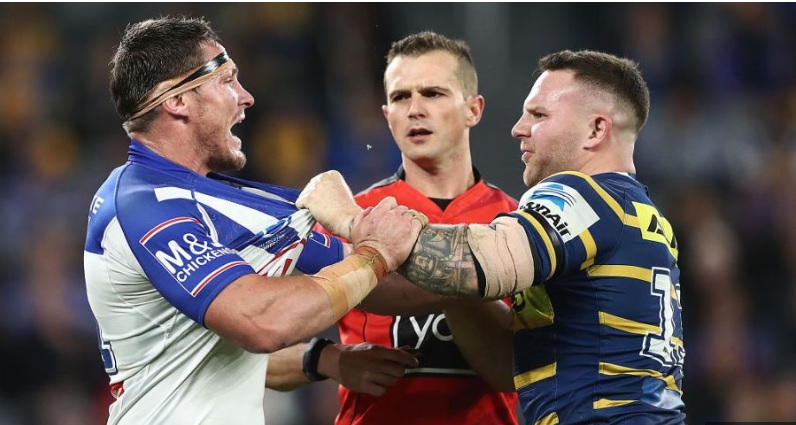 Parramatta firebrand Nathan Brown won’t play again before the finals unless he overturns a charge for his ugly hit on Dallin Watene-Zelezniak.

Brown was on Friday hit with a grade two shoulder charge offense, which will see him miss two games if he takes an early guilty plea.

That will see him return for the first week of the finals, ruling him out of Parramatta’s assault on the top four.

If he elects to fight the charge and fails, he would miss the third match and mean his season could rest in the hands of Parramatta’s performances.

Watene-Zelezniak left the field for six minutes during Canterbury’s upset 12-6 win, after he was hit hard and illegally after passing.

Canterbury coach Dean Pay held fears after the match he had suffered an AC joint injury in his shoulder.

The incident proved a flashpoint with Dogs skipper Josh Jackson grabbing Brown as he was being spoken to by referee Grant Atkins, and setting off an all-in push-and-shove.

Brown was sin-binned for 10 minutes but Pay argued he was lucky not to be sent off, given Bulldogs winger Reimis Smith also spent time in the bin for thrusting his head at Eels winger Maika Sivo.

“If Reimis got 10 minutes, there’s a big difference in it,” Pay said.

He also suggested that Brown had been rushing out of the line all night attempting to put a shot on his players.

“He was having a go all night, he was consistent,” Pay said.

Smith meanwhile is also facing a week on the sideline after being charged with contrary conduct.

His ban could balloon to two if attempts to fight the charge and loses.