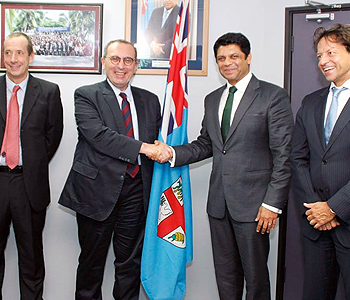 This was highlighted to the President Jioji Konrote by the European Commission Director‑General for International Cooperation and Development, Stefano Manservisi.

The European Union says this financial assistance will support good governance and sustainable rural livelihoods in general with projects on access to justice, support to reform the sugar sector and diversification of agriculture and emergency funding to cope with extreme weather.

This is in addition to almost $110 million worth of ongoing EU funded projects.

Manservisi also met with the Acting Prime Minister and Attorney‑General, Aiyaz Sayed‑Khaiyum and informed him that the EU has redirected and mobilised funds from ongoing programmes to support Fiji after Tropical Cyclone Winston and the EU is currently working on disbursing $22 million to support the rehabilitation of the sugar and agriculture sector.

Manservisi says for the future, the 11th European Development Fund foresees and envelope of $45 million to support the agriculture sector and the sugar subsector reform in Fiji.

He says the preparation of the latter programme is ongoing in close cooperation with the government and should be completed in the course of 2017.

Manservisi also highlighted that EU is pleased to hear the preparations as well are underway for the 2018 general election.

Manservisi says he acknowledges the funding request submitted by the Supervisor of Elections for the training of polling day workers and says that the EU is examining various possibilities and will be pleased to field a mission of electoral experts in particularly similar to the one that worked in Fiji in 2014.

He says EU sees Fiji as an important trading partner in the region.

He says this will contribute directly to advancing the development aspirations of Fiji.

Manservisi says speedy ratification and the implementation of the Economic Partnership Agreement by Fiji would indeed yield positive benefits for the economy and citizens.