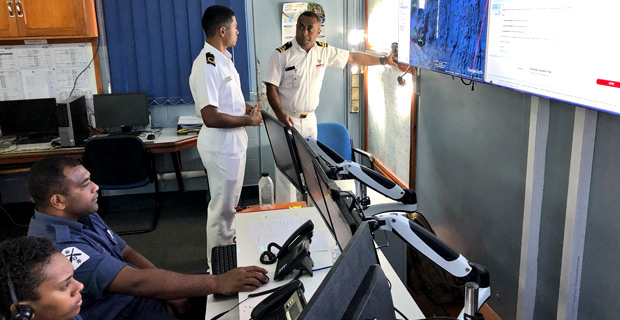 The Fiji Navy through the Maritime Surveillance and Rescue Coordination Centre and patrols is actively working to identify vessels that are ‘high-value targets’ for bringing hard drugs into the country and is sharing that information with Police and the Fiji Revenue and Customs Service.

The Fiji Maritime Surveillance and Rescue Coordination Centre have state of the art technology that allows it to monitor what is coming into Fiji waters and also help in search and rescue operations.

Centre Director, Lieutenant Sairusi Colati says they do have indications that drugs are coming in through yachts from international waters and share this information with Police and the Fiji Revenue and Customs Service.

There have been numerous cases where cocaine and methamphetamine have been found on yachts in Fiji waters.

One prominent case is where Australian national, John Nikolic was jailed last year for importing 12.9 kilograms of cocaine and 34.4 grams of methamphetamine with an estimated value of $30 million.

In March this year, Police through the help of a member of the public found an underwater transponder in the Lomaiviti Group within the range of an area where drugs had been found.

A dive team led by Police Commissioner Sitiveni Qiliho searched the area after suspecting the underwater transponder may have been allegedly used to give coordinates for a drop-off and pick up point for drugs.

Lieutenant Colati says they are also conducting patrols out at sea when they get certain indicators and that has previously led to some successful seizures which included the discovery of parcels of cocaine in coastal areas.

In August last year at least 89 bars of cocaine were found in the Lau Group, Savusavu, Taveuni, and Lomaiviti. 45 bars were found in Lau, 7 bars in Taveuni, 1 bar in Savusavu and 36 bars in Lomaiviti. Authorities have also engaged the help of village headmen in coastal areas.

Lieutenant Colati is part of a Narcotics Workshop at Tanoa Plaza Hotel in Suva this week which will address all aspects of the worldwide drug problem but with solutions specifically for Fiji.