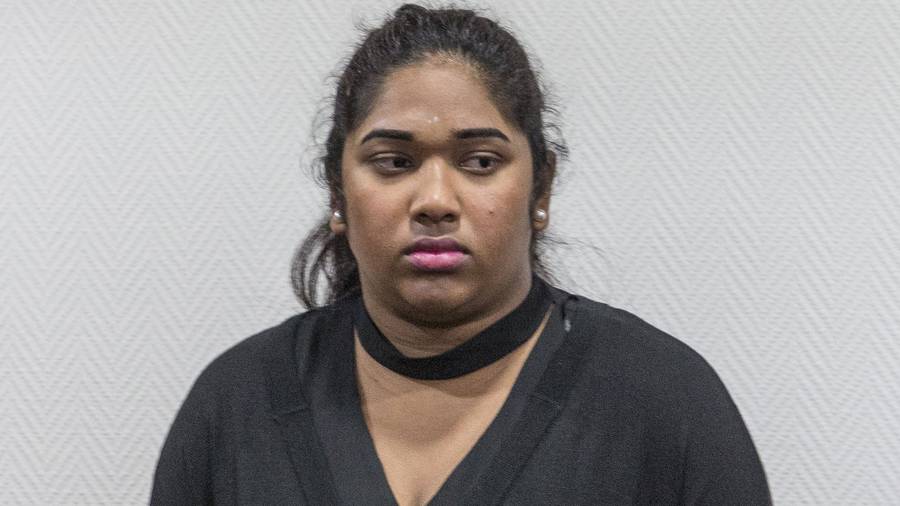 Updated: 6:16am – A babysitter accused of murdering a 1-year-old baby says the child fell off a couch while sleeping, but the Crown told a jury yesterday that the baby’s fatal injuries didn’t match the babysitter’s story.

At the High Court in Christchurch yesterday, Crown prosecutor Mark Zarifeh said Aaliyah died from severe head injuries, including two skull fractures, as well as bleeding in the cranial cavity and eyes. She also had extensive bruises on her face, forehead and ears, the court heard.

Zarifeh says the injuries were inconsistent with a fall from a couch.

Sami’s claims that the injuries were accidental were lies, Zarifeh said, and that she inflicted them.

Aaliyah died in intensive care at about 8.30pm the following day with her parents, Dev Chand and Anjani Lata, by her bedside.

The trial, before Justice Rachel Dunningham, is expected to take two weeks, with the Crown looking to call 25 witnesses.

Sami is represented by defence counsel Jonathan Eaton QC and being assisted by an interpreter.

Zarifeh says that even if Aaliyah had woken and stood on the couch before falling, it was “extremely unlikely” that her serious head injuries could have been caused by a fall.

The Crown alleges that it was a reckless killing, with the injuries inflicted by Sami “in a moment of anger or frustration”.

The trial will hear from several medical experts, including forensic pathologist Dr Martin Sage who said there was clear evidence of blunt force impact to the back of the child’s head.

He said a fall would not explain the child’s injuries.

The trial will hear from Aaliyah’s parents.

The court heard how Chand had moved from Wellington to Christchurch in October 2014 to start a new job as a bus driver.

A colleague, Nilesh Ram suggested his wife Sami who was 4-5 months pregnant, could babysit Aaliyah while Chand was at work.

The day before Aaliyah died, Chand was changing her nappy after picking her up from Sami that night, and noticed a “small red bruise or mark” on her cheek.

He asked Sami about it the next morning. She said it was not from her.

Aaliyah, who had turned 1 days earlier, was not yet walking without assistance, the court heard. She could get to a standing position, Zarifeh said, but not without holding on to something.

Zarifeh stressed that it was a trial by jury, not trial by expert.

Defence counsel Jonathan Eaton QC told the jury in his opening statement that there was no crime committed on January 6, 2015.

It was rare for children to die from such accidents, but all experts agree that it can happen, Eaton told the jury.

Eaton said that the jury, unlike the medical experts, can look at all of the evidence, including who Sami is and what motive she could possibly have had to murder a toddler in her care.

Aaliyah, the defence says, woke up on the couch, pulled herself up on the couch or adjoining bookcase, and lost balance to fall backwards and hit her head.

“She was a toddler, she tragically fell. And nothing else makes sense in this case,” Eaton said.

A jury of seven women and five men was selected yesterday.