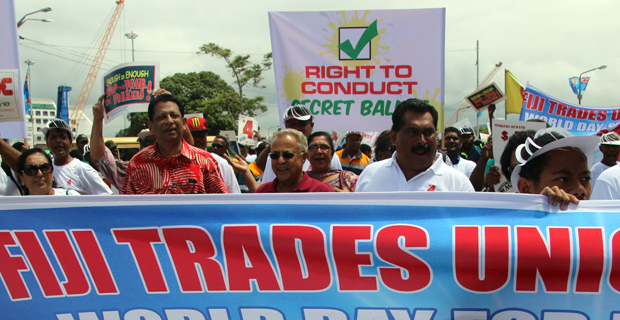 Updated: 6:30am – The Fiji Trades Union Congress this yesterday morning held a march from the Flea Market to Ratu Sukuna Park to protest against Government’s decisions to impose fixed workers’ contracts on the Teachers, Nurses, Civil Servants, the new minimum wage and workers’ rights to take industrial actions in the form of a strike.

More than 400 people came in from as far as Levuka and Nadi and Lautoka to be part of the march this yesterday.

A group of 60 workers from Fiji Ports Lautoka were also present for the march.

20 members of the Federated Airlines Staff Association joined the march to support those who are earning the minimum wage with the hope that their voice will move the minimum wage rate to $4 per hour.

FTUC General Secretary Felix Anthony says that he is happy that people have come out in numbers to fight for their rights as workers and hopes that this will make government address the issues they have highlighted.

The General Secretary says that the purpose of the march is to also protest against Government’s decision to impose a $2.68 wage for workers and their demand remains $4 an hour and the reduction of the public holiday pay to workers covered under the Wages Council Order.

Anthony also highlighted that another reason for the march is to protest the right for workers’ to strike.

Meanwhile, Attorney General and Minister for Civil Service  Aiyaz Sayed‑Khaiyum had earlier stated that the 5‑year term contracts for civil servants does not mean that there is insecurity of employment.

While speaking to nurses and other interested civil servants during the Civil Service Reform Roadshows this year Sayed‑Khaiyum said the government’s stand is that people should be appointed on merit and no one can just terminate the contract of civil servants without going through the disciplinary guidelines and natural justice provisions.

He has stressed that teachers should not be scared about their 5‑year contracts as a contractual form of employment is a norm all around the world.

Minister for Employment Jone Usamate had earlier stated that the national minimum wage is for unskilled workers and is also to accommodate the needs of Small and Micro Enterprises.

Usamate adds that increasing the national minimum wage too high can destroy the Small and Micro Enterprises and can also affect inflation.

Teens hospitalised after attack in Nelson

Forest and Bird say hundreds of areas are being unlawfully harmed