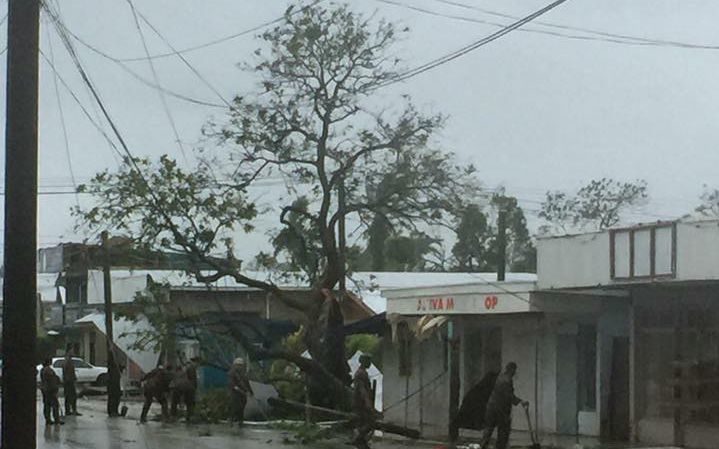 Updated: 9:35am – Tonga’s emergency services say they are struggling to get out and assess the damage after Tropical Cyclone Gita left a trail of destruction overnight.

Roads all over Tongatapu are blocked by debris and downed power lines hampering relief efforts.

NEMO staff say a full assessment of the damage may not be available until tomorrow morning.

On Tongatapu, the category four cyclone brought winds of over 233km/h which ripped roofs off houses, brought down trees, destroyed a Catholic church, and took the Tongan Met Office and the national radio station off line.

Check out RNZ’s live coverage here, and find out what you need to know

There are unconfirmed reports two people have died.

Emergency services and His Majesty’s Armed Forces have headed out to assess the damage this morning.

“I’ve been involved in disaster responses for 30 plus years and it’s the worst situation I have been in.”

There had been major destruction, Mr Kenna said.

“It’s quite a bad situation.”

The armed forces were rescuing people throughout the night, including a woman who was in labour and a man who was very badly injured.

Mr Kenna said it was very difficult to get around Nuku’alofa and although he only lives about 1.5km from his office, it took him 25 minutes to drive home due to downed power lines and debris on the roads.

Power and water supplies are out in Nuku’alofa and not even tank water was likely to be available because many tanks had been blown over, Mr Kenna said.

As soon as the worst of the wind was over, the armed forces began to clear the roads, Mr Kenna said.

“We wanted to make sure that once dawn breaks if we needed to get people to hospital we were able to do it.”

He said a curfew would remain in place in Tonga for the rest of the day.

The fact that there was no storm surge because the worst of the cyclone hit at low tide, and that the cyclone did not last as long as was expected were the only positive aspects, Mr Kenna said.

The New Zealand government has pledged an initial $50,000 to assist rescue and relief operations in Tonga.

“So really it’s just a matter of hearing from the Tongan government about what their needs are, and we will be ready to deploy,” Prime Minister Jacinda Ardern told Morning Report.

Fiji’s MetService said the category four storm was very close to being upgraded to the highest category, five.

Well-built framed homes can be damaged in category four winds, and most trees will be either snapped or uprooted and electricity and water outages could last anywhere from several days to weeks after the storm.

Authorities last night switched off the electricity for about 75,000 residents who live on Tongatapu.

Mr Kenna said the New Zealand and Australian governments had emergency supplies on standby and emergency funds were available.

“We can hit the ground running. We’re just dividing up our teams now so that as soon as we can get out there, we’re out doing an assessment.

“We’ll start in the city and then we’ll fan out into the countryside and get a full grasp by mid afternoon on what the needs are going to be,” Mr Kenna said.