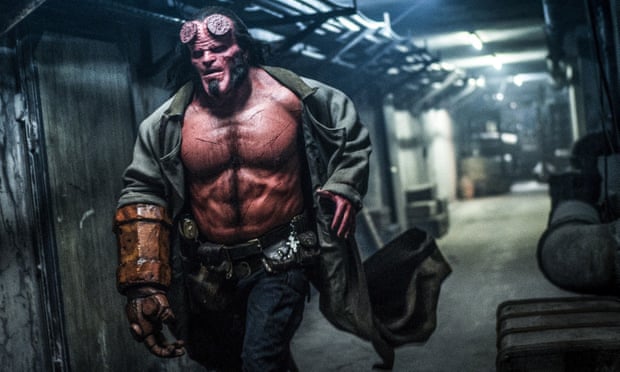 Hellboy is reborn, stridently repurposed as an ongoing franchise property – minus the cigar for these health-conscious times, but also minus the wit and the exotic strangeness and the beauty-and-the-beast romance that Guillermo del Toro once gave him.

De Toro served as writer-director of the two original live-action films based on the Mike Mignola graphic novel character – Hellboy (2004) and Hellboy II: The Golden Army (2008) – which starred Ron Perlman. Now it is directed by Neil Marshall, Andrew Cosby writes and David Harbour (from TV’s Stranger Things) takes over the role of Hellboy – that tandoori-red creature with the sawn-off horns, born of a Nazi occult ceremony in 1944 but brought over to the forces of light by a top-secret organisation and recruited to battle the satanic armies of evil.

Yet for all the badass attitude and the CGI mini-apocalypses he strides through, this Hellboy is lacking. He is more of a Heckboy: a banal action-movie figure without the unexpected likability of his previous iteration. Now he just has a series of ho-hum subordinate characters, to be revived, or not, depending on whether the numbers justify more films in this vein.

In Ye Olde Arthurian Times in Britain, an evil queen named Nimue (Milla Jovovich) was dismembered and her various body parts buried in disparate areas of the realm “where no one will ever find them”. But a painstaking process of search and reassemblage has been under way in the intervening centuries. In the present day, Hellboy, under the direction of his handler-slash-father-figure, Professor Broom (Ian McShane), must prepare to take on this enemy alongside his associates Alice (Sacha Lane) and Major Ben Daimio (Daniel Dae Kim).

And so a standard-issue fantasy-action movie plays out, with vague visual echoes of John Landis and Terry Gilliam, although the images look more as if they had been generated by some form of pictorial algorithm. As in the other films, Hellboy has ideas similar to those grappled with by the X-Men: he occasionally rages against Professor Broom’s agenda and thinks maybe he should be working with these devilish creatures, bringing them over to his side – just as happened to him – instead of mindlessly bashing them.

Well, maybe. It couldn’t be more boring than this. It is counterintuitive to say it, but there is something pretty soulless about this new Hellboy franchise.

NATIONAL NEWS: Finally return home today for some New Zealanders stranded in India since the outbreak