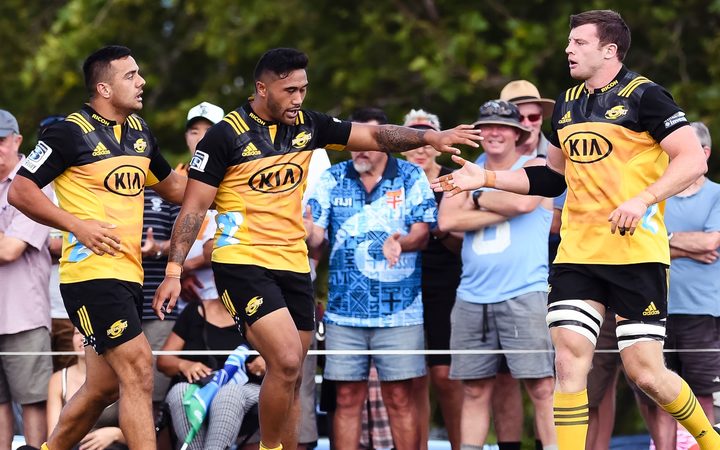 Updated: 10:42am – The Hurricanes and Highlanders had the most to smile about after a pair of Super Rugby pre-season matches involving New Zealand teams on Thursday.

Up against newly-crowned Brisbane 10 champions the Blues in Warkworth, north of Auckland, the Hurricanes came from two points down at halftime for a 26-14 triumph.

While results of pre-season games are rarely viewed as hugely significant, the scoreline was not the only disappointment for the home team.

A Highlanders outfit stacked with All Blacks was too slick for the Crusaders in Waimumu, near Gore, powering to a 42-26 victory.

Returning fullback Ben Smith, halfback Aaron Smith, wing Waisake Naholo and flanker Liam Squire all played significant minutes for the Highlanders, who had first-five Lima Sopoaga hobble off in the first half before returning in the second to complete the match.

Conditions were hot and humid conditions for the Hurricanes clash with the Blues at the Mahurangi Rugby Club, the visitors impressing ahead of their opening regular season match against the Bulls in South Africa next weekend.

It was the home team, though, who led 14-12 at the break after a Matt Duffie try and a superb solo effort from young All Blacks star Rieko Ioane cancelled out five-pointers to Canes duo TJ Perenara and Matt Proctor.

The second 40 minutes was not so entertaining, the Canes striking through Jonah Lowe and Murray Douglas early in the piece and maintaining their advantage as the quality of played dropped off in the final quarter.

Chris Eves was stretchered from the field for the Hurricanes in the second half, but coach Chris Boyd said the prop had only received a ‘stinger’ to his shoulder and was expected to be fit to travel.

In the other match, new Highlanders coach Aaron Mauger had plenty to be happy about after a six tries to four win against their southern rivals.

Both coaches would also have been pleased to get through the clash without any significant injury issues.

Utility back Matt Faddes shone for the Highlanders with a hat-trick, two of those coming in the first spell as his side raced out to an early 14-0 lead before taking a 28-19 buffer into the break after the Crusaders responded.

The Crusaders got within two points with an early second half try, but two more five-pointers sealed a satisfying performance from the Dunedin-based outfit.

The Highlanders open their campaign at home against the Blues on Friday next week, with the Crusaders hosting the Chiefs on Saturday night.

The Hurricanes battle with the Bulls is early on Sunday morning.

FIJI NEWS:- A former Fiji citizen is dead after being shot...

The Fisheries Ministry is urging Fijians to be vigilant while consuming...