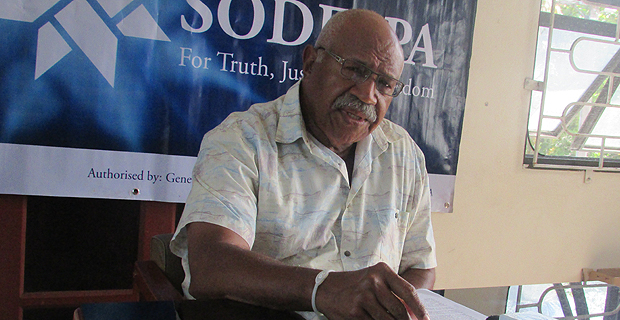 Updated: 7:31am – SODELPA Leader Sitiveni Rabuka says it was a sad anomaly to be celebrating the anniversary of Fiji’s cession, our independence and our republican status without the Great Council of Chiefs given that the GCC approved Fiji’s cession to Great     Britain in 1874 and the GCC consented to independence in 1970.

Rabuka says the combination of indigenous Fijian goodwill, Indo‑Fijian industry and the British or Westminster system of government, laws and Christianity was the formula that enabled Fiji to develop as the regional economic hub.

He says a more consultative approach must be followed by the government to bring our people together.

Rabuka says he personally believes that the traditional leaders as represented by the Great Council of Chiefs and the leaders of the tenant community should continue to have dialogue.

He says we have to learn and teach each other, and work together to bring national unity and progress, starting as individuals,    as families and at our own personal level in our community, Vanua, Provinces, Confederacies and then ultimately, at the national level.

Rabuka says the Deed of Cession of 1874, contains an important vision for Fiji and that vision articulated by the chiefs of Fiji, is still valid today, 143 years later.

The SODELPA Leader says the chiefs, in ceding these islands too Her Majesty Queen Victoria and her heirs, expressed their desire to secure the promotion of Christianity, civilization and to increase trade and industry.

Rabuka says he acknowledges that Christianity is the civilising influence on indigenous Fijian society.

He also says that Christianity empowers the i-Taukei to love their neighbour and to share their land and resources.

Rabuka says the approval by the GCC for the transfer of the legal title for native land, in trust to the Itaukei Land Trust Board in 1940 facilitated the large-scale freeing up of native land for sugarcane farming and later tourism, which are the largest earners of foreign exchange for our country today.

He says that single act of entrusting the indigenous people’s     native land to the Itaukei Land Trust Board and freeing it for leasing, initially for sugar cane and later for other uses, paved the way for the rapid economic development of Fiji.