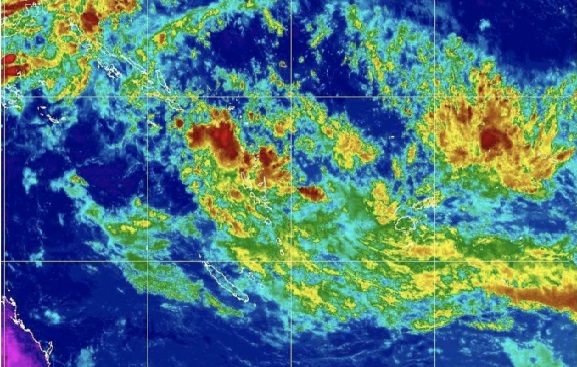 Updated: 11:12pm – A trough of low pressure lies slow moving to the west of Fiji and extends north of the Group.

Within this trough, a low-pressure system has developed near Vanuatu and expected to pass north of Fiji in the weekend. Associated cloud and rain affects the country.

The low-pressure system is expected to deepen into a disturbance as it gradually moves eastward, passing between Rotuma and Vanua Levu this weekend and lying south of Samoa early next week.

The system has a potential to become a significant depression as it approaches Samoa early next week and changing direction to southeastwards. The chance of developing into a tropical cyclone is moderate.

The system does not pose direct threat to Fiji on the forecasted movement, however associated active trough of low pressure to affect the country.

Associated cloud and occasional rain, heavy at times with isolated thunderstorms are likely, especially the northern and the eastern parts of the country.

As the system draws closer, rain is expected to gradually increase from occasional to periods of rain and become frequent in these areas. Localised heavy rain may lead to flash flooding and those communities living in the flood prone areas in the Central and Eastern Divisions are advised to remain alert.

Over Fiji Waters, expect east to southeast winds, 20 to 25 knots, gusting to 35 knots with rough seas. A strong wind warning is now in force for land and waters of Rotuma in anticipation of the approaching system this weekend. Expect occasional showers, heavy at times and a few thunderstorms with moderate westerly winds increasing from fresh to strong later tomorrow.

The situation will be closely monitored and subsequent updates will be released as any rapid changes in the situation are expected this weekend. An improvement in weather is anticipated to come through later Sunday or Monday from the west as the ridge of high pressure extends from the south over Fiji.

All communities are advised to remain alert and prepared at all times and adhere to official alerts, warnings and advisories. For more details and the latest on weather, please contact the National Weather Forecasting Centre on 6736006, 9905376 or visit the Fiji Meteorological Service’s website, www.met.gov.fj or direct link for Fiji Heavy Rain Alert/Warning http://www.met.gov.fj/aifs_prods/20014.txt.

WORLD NEWS: WHO warns coronavirus worst could be yet to come