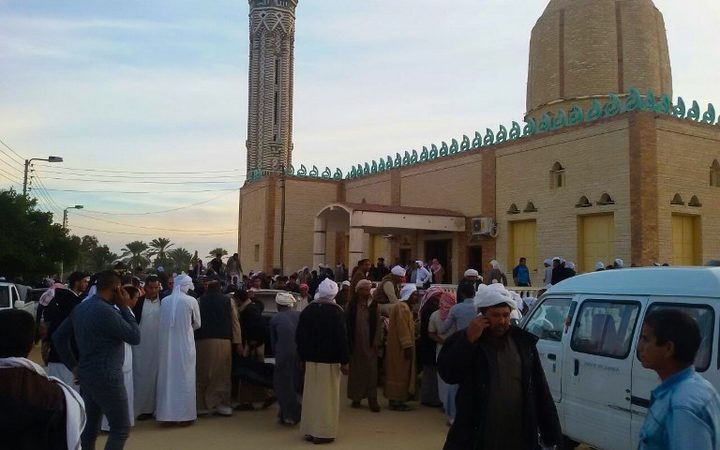 Updated: 8:33am – Militants have launched a bomb and gun attack on a mosque in Egypt’s North Sinai province, killing 235 people, state media say.

Witnesses say the al-Rawda mosque in the town of Bir al-Abed, near al-Arish, was targeted during Friday prayers.

It is the deadliest attack of its kind since an Islamist insurgency in the peninsula was stepped up in 2013.

No group has yet claimed the attack, but militants affiliated with so-called Islamic State have been responsible for scores of deadly attacks in the province. They usually target security forces and Christian churches.

Witnesses said dozens of gunmen arrived in off-road vehicles and bombed the packed mosque before opening fire on worshippers as they tried to flee.

The assailants are reported to have set parked vehicles on fire in the vicinity to block off access to the mosque.

Pictures from the scene show rows of bloodied victims inside the mosque. At least 100 people were wounded, reports say.

It is one of the deadliest militant attacks in modern Egyptian history.

Locals are quoted as saying that followers of Sufism, or Islamic mysticism, regularly gathered at the mosque.

Some jihadist groups, including so-called Islamic State (IS), see Sufis as heretics.

Militant Islamists have been waging an insurgency on the Sinai peninsula in recent years, stepping up attacks after Egypt’s military overthrew Islamist President Mohammed Morsi after mass anti-government protests in July 2013.

Hundreds of police, soldiers and civilians have been killed since then, mostly in attacks carried out by Sinai Province group, which is affiliated to IS.

In September, at least 18 policemen were killed when the group attacked a convoy near al-Arish.

Sinai Province has also carried out deadly attacks against Egypt’s Coptic Christian minority elsewhere in the country, and said it bombed a Russian plane carrying tourists in Sinai in 2015, killing 224 people on board.

It has been operating mainly in North Sinai, which has been under a state of emergency since October 2014, when 33 security personnel were killed in an attack claimed by the group.

Sinai Province is thought to want to take control of the Sinai Peninsula in order to turn it into an Islamist province run by IS.

Arab League chief Ahmed Aboul Gheit condemned the attack as a “terrifying crime which again shows that Islam is innocent of those who follow extremist terrorist ideology”.

UK Prime Minister Theresa May tweeted: “Appalled by the sickening attack on a mosque in North Sinai. Condolences with all those in #Egypt affected by this evil and cowardly act.”

US President Donald Trump called the attack “horrible and cowardly”. French Foreign Minister Jean-Yves Le Drian expressed condolences to these families of those killed in the “despicable attack”.