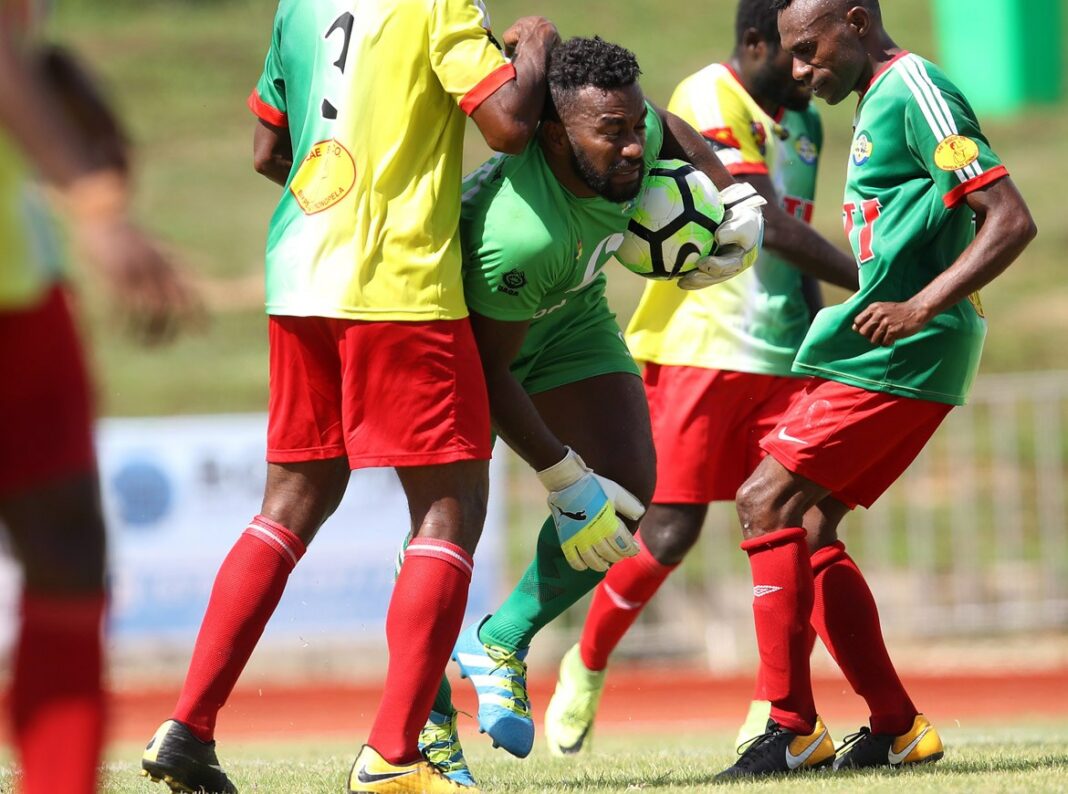 Updated: 7:08am – The OFC Champions League 2018 has its first quarter finalists after tournament debutants Nalkutan and Lae City Dwellers secured their spots with 4-0 and 1-0 wins over opponents Tupapa Maraerenga and Ba respectively yesterday.

The victories are the second in two matches for both sides and mean they cannot be denied a top two finish in Group A when the final matches are played on Friday, meaning a first exit from the group stage of this competition for both sides.

Lae City Dwellers opened the day’s action at Korman Stadium in Port Vila expecting a tough match against a hungry Ba FC, and that’s what they got.

“When we saw Ba play on Saturday we were thinking ‘can we go through?’, but we got our confidence and thought we could win and we did.

“Ba is a very good side, very experienced in the Champions League but we also thought we could surprise them.”

The Fijians were tight in defence and despite what seemed like unstoppable shots on goal, goalkeeper Josaia Ratu kept a quick and powerful Lae strike force at bay for over an hour.

Raymond Gunemba is a well-known threat, but Ba were also dealing with speedster Obert Bika out one side and Tutizama Tanito on the other which kept the backline and keeper on their toes with efforts coming from all directions.

Ba had a couple of their own chances with 17-year-old Kishan Sami more than holding his own against some much more experienced opponents, but like Lae, the Fijians were unable to turn chances into goals in the first half.

After requiring treatment twice during the match and limping to the changing room at half-time, it was assumed that Ratu would be swapped out for the second half. However he came out and played another decent 15 minutes of football before he could continue no more.

That meant former Fiji U-20 international Misiwani Nairube had an opportunity to enter the game, and it was unfortunate that only three minutes after his entrance Lae City Dwellers found themselves in the lead.

A tidy strike from Solomon Islander Tutizamo Tanito off the set-up from Raymond Gunemba gave his side a lead they’d hold onto for the remainder of the match.

With his side out of the running for a place in the quarter finals, Ba coach Ronil Kumar was somewhat lost for words at the full-time whistle.

“Actually I can’t say much about it. We learned a lot out of it. We started the game really well but the thing was, you have to score if you want to win. We didn’t score, they win. They score, they win.”

One positive from the performance was that of Josaia Ratu, who impressed despite carrying an injury.

“He was the number one goalkeeper for us and when he was on the field, he did his best.”

The evening encounter saw a reshuffled Tupapa Maraerenga taking on the home side with the hope that their revised plan of attack would help stem the flow of goals from the first encounter here at the OFC Champions League.

The side were overwhelmingly more organised on the pitch with Tyrell Barringer-Tahiri acting as coordinator from his spot in the middle of the defence. The side were also buoyed by an improved performance from goalkeeper Keegan Inia who shook off some of the rust in match one and was ready for business in today’s outing.

While the focus was defence and compact pressing when out of possession, Tupapa had a couple of good chances to nick a goal in the match with Sean Latimer and Maro Bonsu-Maro combining well.

Tupapa Maraerenga coach Alex Napa said going into this match they knew they were up against it but hoped that the overall performance from his side would lift compared with game one.

“We came here to get a feel for this kind of football and from our first match it’s come up a few notches,” Napa said.

“We didn’t look like we were going to take the game, but if we could keep progressing like this it’s a huge plus for us. And you can’t take anything away from Nalkutan. The goals they scored were quality goals and that’s the sign of a good team.”

Although his side scored just once in the first half thanks to an Azariah Soromon effort, Moise Poida never lost confidence that his side would prevail.

The second half boasted a more persistent and confident performance from his team and the pressure they heaped on a tiring Tupapa paid off when James Naka got on the end of a ball and fired past the goalkeeper.

Unfortunately for the striker, he retaliated following a late tackle on him from Barringer-Tahiri as he took his shot, and for that he was shown a red card. Barringer-Tahiri was cautioned for the challenge.

It left Nalkutan two goals up, but a man down which Tupapa did their best to take advantage of. However the home side never looked out of sorts and soon added two more courtesy of the impressive Raoul Coulon and substitute Roddy Lenga.

Poida said the approach from their opponents was expected, but it took time for his team to adjust and impose their style.

“We expected that the opponent would come with a totally different strategy and the full block was just outside the penalty area and we couldn’t find a way in,” he explained.

“But in the second half we changed everything, we started to attack from the sides and get in behind and that’s how we were able to score four goals, which was good enough.”

Nalkutan and Lae City Dwellers six points from two matches mean they’ll finish in the top two positions in the group, and their final match on Friday will determine who gets the home quarter final.

Prior to the showdown at 5pm, Ba and Tupapa Maraerenga will meet at 2pm in their final encounter of the OFC Champions League 2018.

Featured image:  Ba’s Josaia Ratu was outstanding for his side as they took on Lae City Dwellers. Credit: OFC via Phototek

NATIONAL NEWS : Murder examination propelled after a man dies in shooting in Northland

This is why Ranbir Kapoor got Govinda’s role chopped off in...