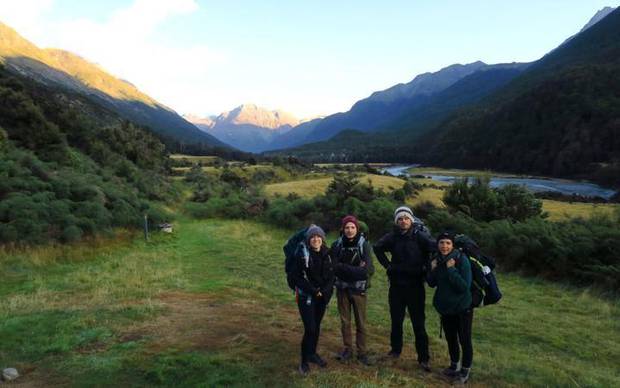 Share
Facebook
Twitter
WhatsApp
Linkedin
Viber
Email
Imagine heading into the bush last week and coming out five days later, only to find that Covid-19 had turned the world upside down.
That’s been the mind-boggling reality for Pauline Dupont and her partner Romain, both from Belgium, who emerged from a tramp on Monday to find most international borders shut, and virtually no way to get home.
The pair live in Melbourne and have Australian working holiday visas, and had been in New Zealand since 6 March for a one-month holiday.
They had been tramping near Queenstown with friends from Belgium, and had been out of cellphone service for days.
They got a big shock when they turned their phones back on on Monday – New Zealand was getting ready for lockdown, Australia had closed its borders to non-citizens and residents, and much of Europe was also shutting down.
“We were very sad and shocked at the same time, we didn’t want to believe that it was real,” Ms Dupont told Checkpoint. We could not breath … our brains started to change into war mode … you just have to quickly get to the airport.”
They arrived at Queenstown Airport, but there were no flights.
They and some other travellers decided to rent a car and drive to Christchurch, in the hope there would be flights to Melbourne, or somewhere they could get another flight back to Belgium.
“First we thought we would go to the airport and find a solution, but they told us that’s not possible. “We didn’t know what to do, we were really lost.” Aside from being stuck in a foreign city, Pauline and Romain have another problem – most of their belongings are in Melbourne, and they both only had small backpacks with essential items.
“I have a soap, one pair of shorts, my pants are on me, I have two tee shirts, a pullover … I have four pairs of socks and underwear … and a reader.”
They put a plea out on Facebook for at least somewhere to stay, and someone has offered to put them up. Others have offered clothes and other items.
They were now hoping they might be able to get on a mercy flight the German government was organising for its citizens. But despite their desire to leave, they are concerned about travelling.
“We don’t want to get trapped … it’s not safe. We could get sick on the way, we don’t want to put ourselves in danger and we don’t want to put anyone else in danger,” Dupont said.
“We thought the safest option was to stay in Christchurch.”
-RNZ-NZ Herald
Featured image: Pauline Dupont and Romain (left) and friends tramping in New Zealand. Photo / Pauline Dupont
- Advertisement -

WORLD NEWS: Will the coronavirus kill the oil industry and help save the climate?