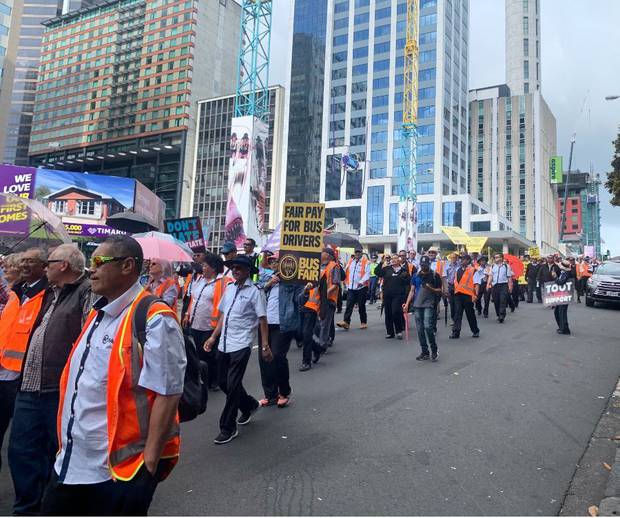 About 70,000 Auckland commuters are affected by bus cancellations this morning after drivers and the transport company NZ Bus failed to resolve their dispute.

Many buses are likely to be off Auckland’s roads in the upcoming days, possibly until Christmas.

The cancellations will mean that Aucklanders need to find another way to get to work and is expected to put further pressure on the city’s motorways and roads, with two crashes in Takanini and Ellerslie also slowing traffic in Auckland this morning.

An eleventh-hour meeting between NZ Bus and the drivers’ union failed last night, with no compromise reached.

Jared Abbott from First Union said the company arrived at the crunch-time meeting with a fixed position.

“No progress could be made,” he said.

“We have a mediation [today] and we’re more than willing to negotiate with the company, so it will come down to whether they will see a benefit in trying to progress further or whether they want to take a hostile position.”

Abbott said the union was working to get the buses back to the road today, but this was a necessary action to achieve a resolution.

NZ Bus operates 30-35 per cent of the city’s services, along some of the busiest routes along Dominion, Sandringham, Mt Eden and Manukau Rds, as well as other routes across the wider Auckland region and the LINK services.

Traffic is extremely heavy through on the Southern Motorway from Drury through to Takanini due to an earlier crash.

Vehicles involved in the crash were cleared to the motorway’s centre median before 6.30am but rubbernecking meant traffic was still slow.

Bus shutdown: How it came to this

Drivers were suspended and thousands of bus trips in Auckland operated by the company NZ Bus were cancelled last week after drivers refused to collect fares.

The drivers are pushing for better wages and conditions and have been holding pickets across the city over the weekend.

A meeting between the unions and NZ Bus was unproductive.

“Our position is very simple. All the company needs to do is to withdraw their suspension notices and the buses will be back on the road. If they’re looking for concessions from us, then it may not be that fruitful a meeting,” Abbott earlier said.

Abbott said the unions want a short-term solution to get the bus drivers back to work and to end the disruptions. He said drivers need a better pay rate and a solution that may take a bit longer, to deal with the problem around contracting and how it currently works.

Will depart Mt Roskill shops at 6.30am, with services leaving around every 15mins until 10am.

Between 10am and 4pm, it will run every half hour.

Route 25 from the Civic Centre

From 3.45pm it will run about every 15 minutes, with the last bus departing at 7pm.

Between 10am and 4pm it will run every half hour.

After 4pm it will run every 15 minutes, with the last bus departing at 6.15pm.

After 3.45pm it will run every 15mins, with the last bus departing at 7pm.

Wiliame has been promoted from the bench to replace suspended centre...

WORLD NEWS: Trump’s WHO de-funding ‘as dangerous as it sounds’