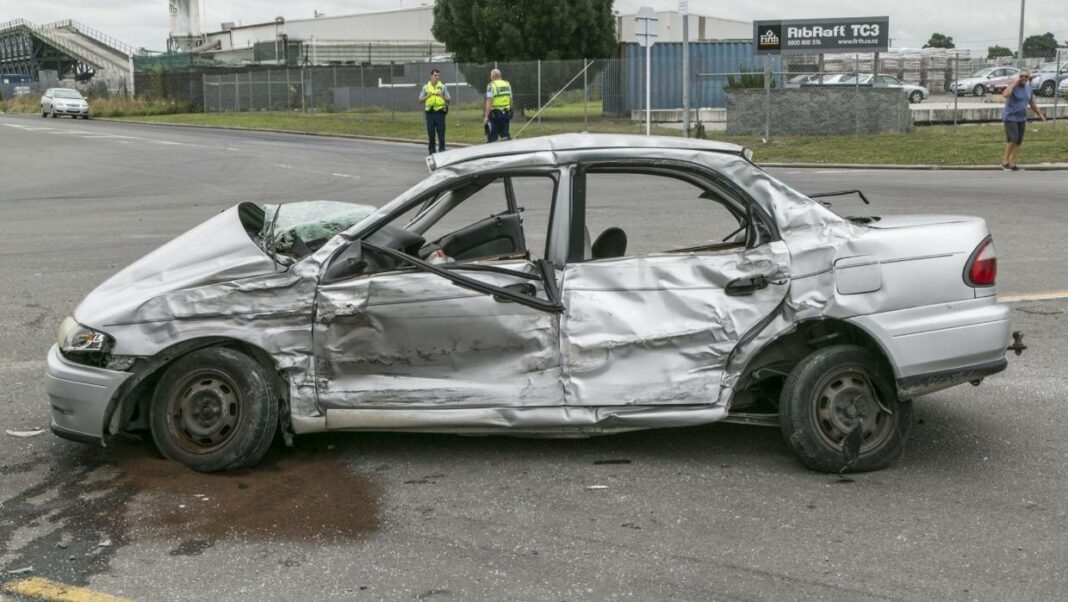 Authorities were warned of “significant concern” about an intersection and told worn road markings needed repainting. They were slow in making changes and an elderly woman was killed. Blair Ensor reports.

At the age of 83, Colleen Case was independent and active.

The widow – a mother of six and a keen bingo player – was a confident driver and could often be found visiting family and friends in Christchurch in her silver Mazda car.

As she returned home from such an outing on January 26, 2018, she was killed.

Case – described as “the glue that held her family together” – was driving along Logistics Dr at 50kmh when she failed to stop or slow down at a compulsory stop sign at the intersection of Sawyers Arms Rd, an industrial area on the outskirts of the city.

Her car was struck on the passenger side by a large truck and trailer unit that had right of way and no chance of stopping.

She died at the scene.

At first glance, it appeared an unremarkable crash where an elderly driver had failed to see a red stop sign.

However, when her son, David Case, visited the scene later that day he was struck by the intersection’s badly worn road markings.

He would later learn that six weeks before the crash police had told the Christchurch City Council the white and yellow lines needed repainting, but a contractor hadn’t completed the work as per its contract. And that the intersection had been flagged as one of “significant concern” but recommended changes hadn’t been made.

For nearly two years, Case has waited for the outcome of a coronial investigation, which has been slow in coming, in part because the agencies under scrutiny objected to some of its provisional findings.

The delays compounded the family’s grief, he says.

“I feel angry because … someone has not done their job – there are people who were negligent.

The Sawyers Arms Rd and Logistics Dr junction was changed from a T to a crossroad intersection on December 23, 2015 as part of a roading project that gave motorists easier access to State Highway 1.

According to a council report, there were no crashes at the intersection in the 23 months before the change.

From that date until January 26, 2018 there were 10 crashes – the fatality involving Colleen Case, four that resulted in minor injuries, and five where those involved emerged unscathed.

In August 2016, temporary advance “stop” warning signs were installed “some distance back” from each intersection warning of the need to stop at the intersection.

An independent road safety audit provided to the NZ Transport Agency (NZTA) in April 2017 raised “significant concern” about the intersection, saying the probability of a crash occurring was “common” and it was “likely” someone would suffer serious or fatal injuries.

The report recommended line marking changes which had not been made at the time of Case’s crash.

In findings, released this week, coroner David Robinson said there were four crashes at the intersection in the four months to October 26, 2017, and “greater priority should have been afforded to the implementation of the safety improvements arising from the … audit report”.

Robinson’s findings also show that on December 18, 2017, police told the council that the markings at the intersection required repainting.

The next day, the council alerted its contractor, Citycare, which assigned the work to Fulton Hogan.

The job was not highlighted as a safety issue so it was put on a regular maintenance schedule.

However, according to Citycare’s contract with the council, the intersection should have been inspected within two days.

That didn’t happen. If it had, and the state of the road markings were deemed to pose an “imminent hazard” to motorists, the work should have been carried out within six hours.

The markings weren’t repainted until the day after Case’s crash, six weeks later.

Robinson said the state of the intersection’s markings had not been “properly assessed”.

They were badly worn and an approaching motorist “could well be forgiven” for not seeing them, he said.

However, at the time of the crash there was a red stop sign at the intersection and an advance warning sign 100 metres further back.

Robinson noted a comment from the then Canterbury road policing manager Inspector Al Stewart to council staff, which said:

“This is unfortunately one of those roads where in the absence of very clear signage drivers see only the straight road (heading north) and drive accordingly.”

Robinson said he did “not discount the appearance of the intersection as being a factor” in the crash but he was satisfied “the cause of the collision was likely to have been inattention on the part of Mrs Case”.

“The manner of driving is consistent with failing to see the stop sign. The extent to which the absence of road markings or the general appearance of the intersection contributed to the crash cannot be established with any degree of certainty.”

However, the circumstances “demonstrate the need for adequate markings and signage, and advance markings or signage where those at the intersection may be obscured”.

“While the ‘stop’ sign was visible, given the nature of the intersection, that alone in my view would not necessarily have been sufficient to alert the average driver to the compulsory stop. Traffic design must necessarily recognise the potential for a single road sign to be missed by even the prudent driver.”

Robinson said the key recommendations of the 2017 safety audit had been implemented since the crash and the “current layout clearly conveys that it is an intersection at which the user does not have the right of way”.

He recommended that the council and Citycare review their processes around prioritising road marking.

In a statement, the council’s city services general manager David Adamson said the organisation had “reinforced” to its contractors that any concerns about safety-related road markings must be responded to with urgency.

“We take any road crashes in the district very seriously and are committed to doing all we can to ensure the safety of all road users,” Adamson said.

“We will now thoroughly review the Coroner’s findings to ensure our practices and processes are aligned with the recommendations made.”

Citycare Group said it would “abide by the findings and recommendations of the coroner”.

A Ministry of Justice spokesman said there were a variety of reasons an inquiry could be lengthy, including the need to consider evidence from a range of sources.

He acknowledged delays could be frustrating for families. The ministry was in the process of hiring eight relief coroners to ease a backlog of cases, and “hopefully improve … turnaround time”.

‘WE WANT AN APOLOGY’

David Case believes the coroner’s findings highlight the relevant issues in relation to his mother’s death.

However, the family would like an apology from those involved with the intersection prior to the crash.

An NZTA representative has agreed to meet with him to discuss the case. He will request that someone from the council does the same.

Case hopes greater urgency will be afforded to making changes to other intersections across New Zealand when issues are identified.

“We can’t have mum back but hopefully we can make sure this doesn’t happen to anyone else.”

Featured image: Colleen Case was killed in a crash at the intersection of Sawyers Arms Rd and Logistics Dr in January, 2018.