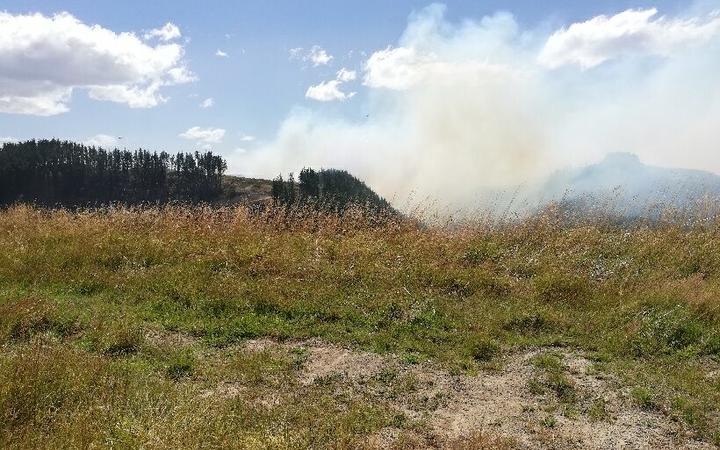 One fire broke out at a pine forest on Tangoio Settlement Road in Napier yesterday morning.

More than 65 people have been fighting it, using a dozen fire trucks, at least six helicopters and a plane. Strong winds have made it difficult to bring the fire under control.

Crews scaled back operations overnight with a strong presence remaining to monitor the situation, with efforts to control the blaze set to resume this morning.

Campers in northern Hawke’s Bay are on standby to evacuate as firefighters tackle the large forest fire nearby.

Power has now been restored to the campsite after being cut off overnight.

Ashcroft said firefighters are keeping him informed and have told him that the so far-safe situation could change.

He said apart from the smoke in the area, it’s like any normal day for those camping at the beach.

Another fire in the Fernhill area northwest of Hastings, and one between Bulls and Hunterville which halted trains on the main trunk line, and reduced State Highway 1 to one lane, were extinguished yesterday evening.

Fire and Emergency said although 179 firefighters have been sent on rotation to help Australia fight its enormous and fatal blazes, it was satisfied it had enough firefighting resources to handle the wildfire season in New Zealand.

The Pigeon Valley fire in the South Island’s Tasman region a year ago was New Zealand’s largest wildfire in half a century, sweeping across more than 2300ha of land and triggering a three-week state of emergency.

Tasman district principal rural fire officer Ian Reade said the fire risk there was not as severe this year, in part due to the catastrophe in Australia.

The Port Hills fires in February 2017 burnt through nearly 2000 hectares of land, destroyed nine homes and damaged five more. A helicopter pilot died fighting the blaze and it prompted the creation of Fire and Emergency New Zealand.

Labour-NZ First government: what you need to know