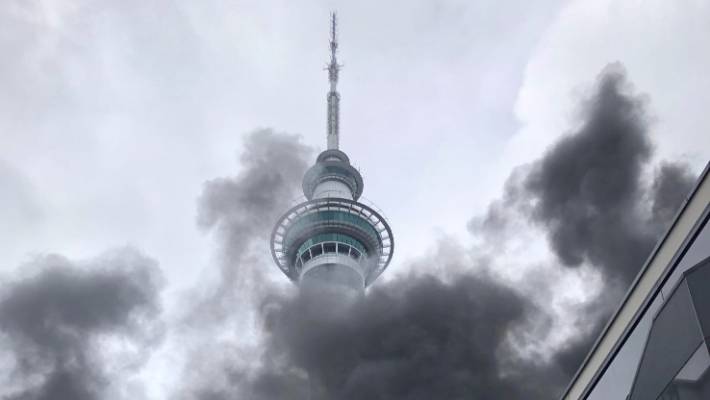 A massive fire has engulfed the under-construction Sky City convention center in central Auckland. Masses of black smoke are billowing into the Auckland skyline and people can be seen on the roof of the building.

A witness said she could see billowing black smoke coming from the Sky City Convention centre in Auckland central. The thick plumes of smoke have darkened the sky in surrounding central auckland streets.

Police are establishing cordons and people are massing to watch in stunned silence. A construction worker said police had closed down nearby roads, including busy Hobson St.

There were about 400 employees on site. The nearby hotel had also been evacuated. Sam Veamoi, 19, said he was at a business across the road when he saw masses of smoke and huge flames shoot from the upper stories of the half finished buildings.

“I’ve never seen anything like it,” the student said.

Another witness said flames could be seen from about the sixth story at 1.10pm

Fire is really building. People can be seen on the roof. pic.twitter.com/EFgQBaMYCJ

Rabuka is still making the same argument about race which he...

14 tonnes of disaster relief supplies delivered to Nabouwalu, Bua by...

FIJI NEWS: Only about 50,000 people in the country have downloaded...