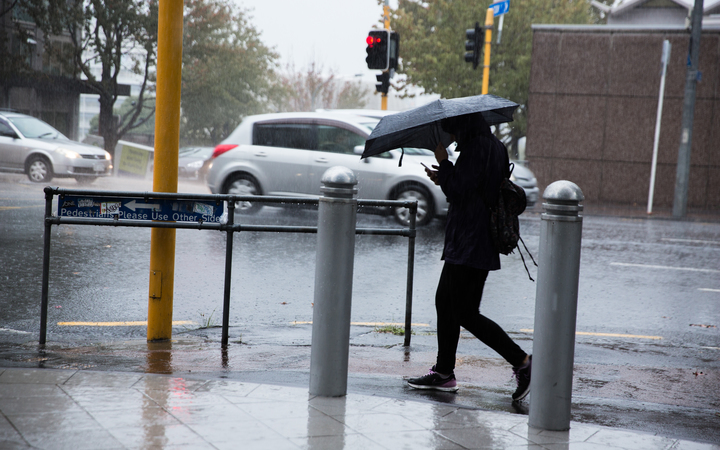 Rain is setting in for Auckland, Gisborne, and Bay of Plenty as a chill sweeps the country following an unusually warm start to July.

Heavy rain is forecast across northern and western areas of New Zealand today, and there could be heavy snow to parts of the Gisborne and Hawke’s Bay ranges.

MetService said the country was expected to be much colder in the next couple of days after a usually warm start to July.

In the Nelson Tasman region, flooding has affected State Highway 6 between Havelock and Nelson and SH65 at Shenandoah was down to one lane due to a washout.

On the West Coast, surface water was causing problems on SH6 at Whataroa and the road from Te Anau to Milford Sound was closed following overnight snow.

MetService said 2cm-4cm of snow was expected to settle near the tunnel there with some reaching down to 800 meters.

MetService has sent warnings about heavy rain in Northland and Auckland from 9 am to 4 pm today, with deluges of up to 35mm/h.

It was expected to hit Bay of Plenty and the Gisborne ranges even harder and for longer, with about 150mm of rain to fall over 16 hours from 11 am, with downpours of up to 40mm/h.

Waitomo and Taumarunui, Hawke’s Bay north of Napier, North Taranaki and the Tararua range were also expected to be hit by rain, which could cause streams and rivers to rise rapidly.

Flooding and slips are also possible and driving conditions may be hazardous.

A MetService forecaster, Micky Malivuk, said the rain would ease to showers overnight. MetService said the North Island would start to feel the coldness of winter tomorrow.

The forecast rain in the Taupō area could add to the town’s problems with its wastewater system, which was badly damaged on Tuesday afternoon.

Over a 90-minute period, about 800,000 liters of waste, including sewage, flowed into Lake Taupō when a water main burst, creating a washout that broke a sewerage pipe.

The spill, which is more than four times bigger than first estimated, has now been stopped but the system is reliant on pumps while engineers work out a solution.

Taupō District Council, Waikato Regional Council and Tūwharetoa Trust Board – which owns the lakebed – are also looking at some cleanup measures for the spill, which spread along 200m of the lakefront and down Waikato River.

District council chief executive Gareth Green warned the pumps may not be able to cope in heavy rain.

He asked residents to conserve water and not flush the toilet, to help prevent the system reaching its limit.