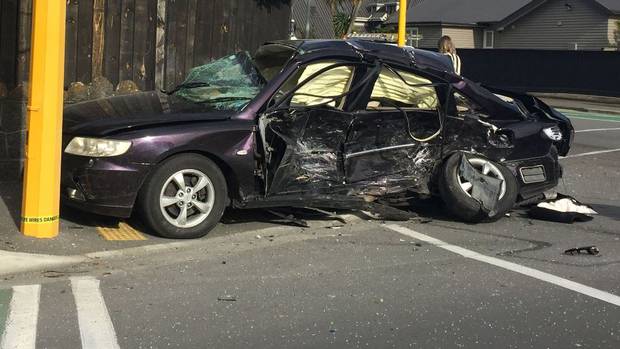 Six people are injured – two of them critically – after a police pursuit ended with a fleeing driver crashing into another car in Christchurch. Canterbury Metro Area Commander Superintendent Lane Todd said a vehicle failed to stop for police on Papanui Rd about 4 am.

“A pursuit began which continued for approximately four minutes through residential streets, before the vehicle was involved in a collision with another vehicle driven by a member of the public at the intersection of Glandovey Rd and Idris Rd,” Todd said.

He said a number of people from both vehicles suffered serious injuries. A St John spokesman said six people were taken to hospital including two in a critical condition, three seriously injured and one person with moderate injuries.

“We have no indication who was from what vehicle or age or gender of the patients,” the spokesman said. Five ambulances and two St John first response vehicles were at the scene.

The Serious Crash Unit is examining the scene and the Independent Police Conduct Authority will be notified, police say. The intersection of Glandovey Rd and Idris Rd will be closed for a number of hours with diversions in place.

Featured Image:- One of the vehicles came to a stop next to a traffic light. Photo / NZ Herald