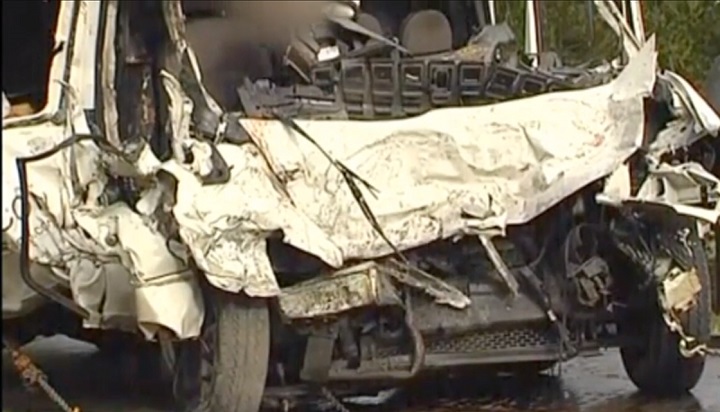 Three people have been killed in a crash just south of Taupō. It’s the second crash involving multiple fatalities near the central North Island town in less than a week. The three people killed were all sitting in the front of a van when it collided head-on with a truck.

The front of the van was almost completely destroyed. Vehicle parts could be seen strewn across State Highway 1 near Hatepe, where the crash happened at 3:40am Saturday. The driver of the truck survived and is being treated in hospital.

“It’s horrific for all emergency services but it’s also horrific for those motorists and those members of the public that are first on the scene and have to offer support and render first aid to these people,” Snr Sgt Fane Troy said.

It’s been an incredibly tough week for emergency services in the area. Last Sunday eight people, including six children, were killed in a crash just north of Taupō, near Atiamuri Those in Taupō a once again searching for answers

“I just thought goodness – what can we do? Is there anything else we can do?” Taupō District Deputy Mayor Rosie Harvey said. Harvey said finding an answer is difficult.

“Obviously the roads need to be looked at constantly and we do have meetings with Transport New Zealand on a regular basis about this and we’re going to up that because it’s really important but driver behaviour is also extremely important.”

While some locals are feeling nervous, others think it’s all down to the roads. “I’m also a cyclist and I ride those roads as well and it’s very dangerous even when we are riding through there there’s almost no room for error,” one told Newshub.

Weather did not play a part in Friday night’s crash, but police are looking into the actions of the drivers and the state of the road as part of its investigation.

NZ ready to provide aid to Pacific in wake of Gita

Singh tells members that strike will be legal if they all...