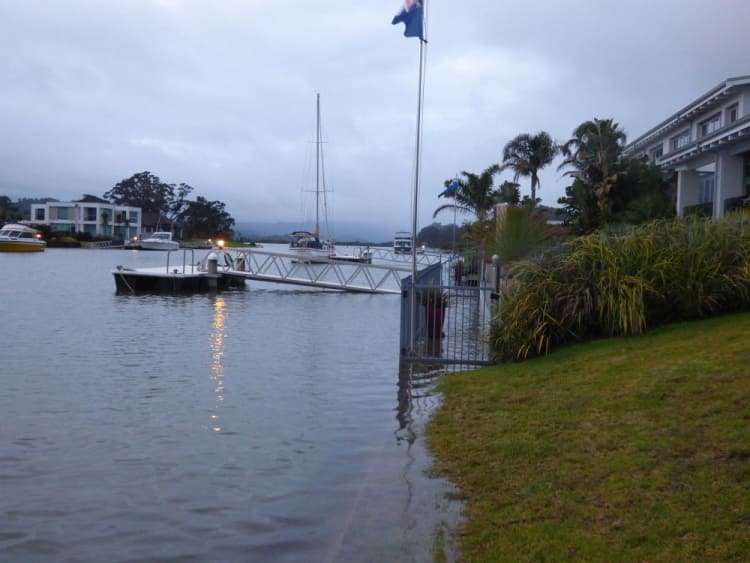 Local councils have been crying out for more central government help with planning for sea level rise. Now a series of independent reports has backed their call.

A series of independent reports into liability for sea level rise has concluded it is time for the government to step up and tell local councils what to do.

Councils don’t have sufficient legal powers, money, or appetite for litigation to do what is needed to prepare — so the government needs to help them, research funded by the Deep South national science challenge has concluded.

Five reports on the legal burden of sea level rise have been completed by Victoria University of Wellington researchers, led by environmental law specialist Catherine Iorns. The researchers surveyed coastal councils, looked at the current law, studied the EQC’s liability and considered the Treaty’s role.

Their major conclusion was that the growing risk to coastal property requires a firmer steer from the government.

Previous modelling by NIWA has found each added 10cm of higher seas puts at risk another 7,000 New Zealand buildings, worth an estimated $2.48b to replace, 133km of roads and 10km of railway line.

While councils can already set development rules to take account of rising flood risk, they are being deterred from taking strong action by a fear of being sued, short electoral cycles and the cost of getting specialist scientific advice, the researchers concluded.

“What is most needed is central government direction and decisions,” says Iorns.

“We have got some tools for handling sea level rise and future decision-making on it, but a lot of those tools are political ones, which require local councillors to make a decision and of course they (councillors) may change every few years and every time there’s an election they have to be brought up to speed,” she says.

“There are a lot of difficult decisions, because they require people to forego something or have a cost imposed or an expectation denied. People have ideas about how their lives will play out, and it might involve making a lot of money selling a beach house at retirement.”

New Zealand has a mishmash of laws covering coastal hazards and risk, including the Resource Management Act, the Local Government Act and the Building Act. The EQC pays out on claims for natural disasters, including flooding damage and landslips, provided the homeowner also has private insurance for the property. But if private insurers retreat from a coastal area because of increased risk from rising seas, cover from the EQC will also disappear, because the two insurances are bundled.

Among the recommendations in the latest reports are: reviewing the EQC’s liability, changing the Resource Management Act, and devising a national plan saying who will pay what share of costs for sea level-related damage and preparation — whether it’s homeowners, ratepayers, taxpayers or an insurance scheme. Climate Change Minister James Shaw has previously said the Government is looking at how to apportion the costs of climate change-related property issues, though he hasn’t announced when a decision will come.

The insurance industry has said it is hoping the Government and councils will act before insurers decide to withdraw cover from large numbers of people’s homes, either by moving people to safer ground, building seawalls or taking other steps to keep risks within insurable levels.

But that kind of coordinated preparation will be difficult without firmer central direction and funding, says Iorns.

“A lot of decisions are not being made,” she says. “But someone is going to have to deal with it, and, like climate change generally, it is probably better and easier to deal with it now. You might prevent people getting hurt. Subdivisions on the coast are being allowed all the time, and we don’t know if there will be any recourse in the future if people die from having a storm come through and it’s been approved after everybody knew [of the risk],” she says. “We need to start with some central direction, because it’s too hard to leave it to people on the ground whose primary knowledge is not sea level rise. You need a team of people who are focused on that.”

One major legal gap is the power to move communities, when the flood risk becomes too great.

The Resource Management Act gives councils the power to zone land for varying levels of development. But there is no clear power for councils to require people in existing homes, that were lawfully built, to move somewhere less dangerous.

Regional councils arguably have the ability to remove people’s existing use rights, says Iorns, but the law is not clear-cut. In Matata in the Bay of Plenty some homeowners have vowed to fight the regional council’s attempts to move them out of a flood zone. Without a law change, there could be costly and repetitive court cases testing whether councils can get people to retreat from rising seas, she says. “No-one knows who is responsible and whether they have the power to do it. Fighting these cases through the courts is waste of time and money, and (that means) no one wants to act.”

Councils surveyed as part of the research had different views on what was needed, but most of those who responded agreed they wanted clearer central government direction.

They told the researchers the Ministry for the Environment’s 2017 policy guidance on preparing for rising seas was helpful, but not enough.

Of New Zealand’s 63 regional and local authorities with oversight of seaside land, 33 responded in detail to the survey.

Of those, three quarters said their organisations do not receive enough direction from central government on how to respond to sea level rise.

Four said their councils had avoided acting on coastal climate hazards for fear of litigation or pushback from property owners, while others said fear of legal pushback was a “factor” in their decision-making.

Iorns says councils did not want to give up their local decision-making power — but they wanted to do it under firmer national guidance.

“Overwhelmingly they [councils] want direction, but there is a limit to how detailed that goes. For example, they may be told it is mandatory to plan for managed retreat in areas that have certain characteristics, but they may want to decide what areas have those characteristics.”

Right now, Iorns says, the law and policy are too unclear to make councils feel confident about acting.

“They [councils] do have a lot of power, but a lot of the powers are unclear and no one wants to be the first, for example by putting notes on LIMs. Councils who have done this and have been sued and then the court has told them to go back and do the process again, have not gone back and done it again. Councils have other things to spend money on, like wastewater treatment plants, it’s not something they want to budget in while there is that uncertainty.”

“Central government needs to step up, not just in laws and rules but in substance, so that they are allowing councils to pay for this,” she says.

Responses to the Deep South researchers’ survey were anonymous. Here’s what some council staff said:

“Our political cycle makes it very easy for decision makers to kick the can down the road. Although the trend (climate change) seems apparent, the likelihood of something cataclysmic occurring in the next three years remains small, so [they] can avoid and ignore the need for a tough decision.”

“[I]n the long term there are likely to be few viable adaptation responses in some areas other than managed retreat – this will be extremely disturbing to many in these areas and funding such responses will be beyond the community’s ability to pay. Local government will be in the invidious position of having to present such scenarios to their constituents without necessarily having a palatable or even practicable solution.”

“[T]he apparent absence, to date, of central government in leading a vital discussion around the cost shares – or in this context, the broader issue of how responsibility for addressing the issue should be shared – associated with [how] climate change will play out, in practice, is a critical failure on the part of the government.”

“We currently have no idea [how to meet costs associated with sea level rise]… we are doing our best with current budgets, and … working closely with [the regional council] to help get the information we require to accurately assess risks to communities and large rural areas which are the economic backbone of this district … unless there is a central government fund or subsidy we will have to prioritise projects and communities [and as] we are a district of mainly lower socio-economic areas … we will be facing a mass exodus of low-lying at-risk communities to other locations which the council cannot afford to help financially.”‘