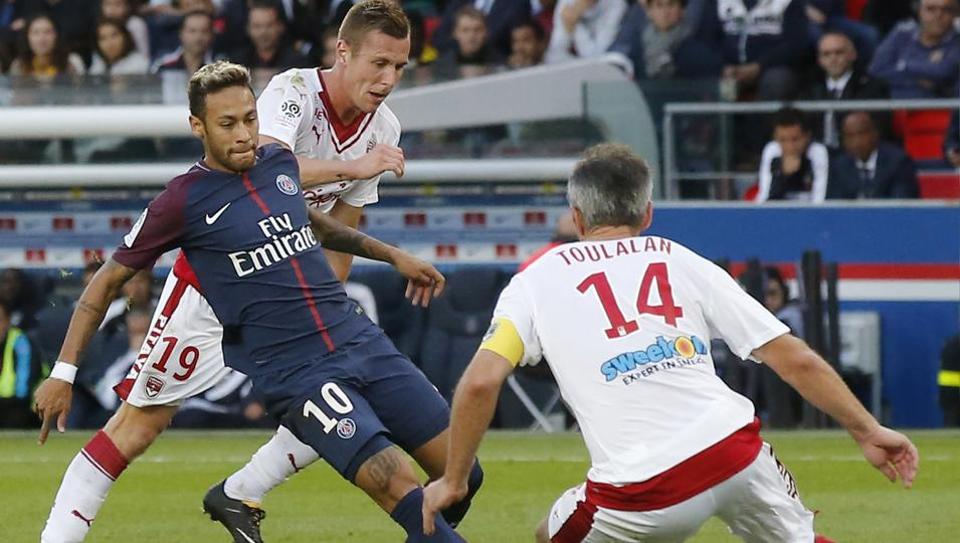 Updated: 8:35am – Neymar scored a double as Paris St Germain’s awe-inspiring firepower was on show again in a 6-2 demolition of Girondins de Bordeaux that stretched their Ligue 1 lead to three points on Saturday.

Edinson Cavani, Thomas Meunier and Julian Draxler also found the back of the net before the break, with Kylian Mbappe adding a goal in the second half as Bordeaux hit back through Younousse Sankhare and Malcom.

PSG, who crushed Bayern Munich 3-0 in the Champions League on Wednesday, have 22 points from eight games to Monaco’s 19 after the principality side were held to a 1-1 home draw by Montpellier on Friday.

Bordeaux, who had been the only other unbeaten team this season, are third, seven points off the pace.

“There’s not much to say. We started with a good mindset but when you concede an early goal against such a team, it’s really difficult,” said Bordeaux captain Jeremy Toulalan.

“We can play better. We lost a bit of focus when we were 3-0 up and we should be more disciplined,” said PSG fullback Meunier.

Neymar opened the scoring after five minutes as he curled a 30-metre free kick under the bar.

Seven minutes later, the Brazilian’s perfect through ball was collected by Cavani, who slotted it past Benoit Costil as PSG doubled their lead.

PSG were all over Bordeaux and in the 21st Meunier made it 3-0, firing the ball into the top corner from Yuri Berchiche’s cross after Mbappe missed the ball.

The visitors reduced the arrears in the 31st when Sankhare found the back of the net from close range after Bordeaux benefited from Marco Verratti’s bad clearance.

Two weeks after Cavani and Neymar argued over who would take a penalty, there was no discussion when PSG were awarded a spot kick in the 40th minute following Otavio’s handball.

It was Neymar who took the penalty, converting it by wrong-footing Costil.

For the first time in their history, PSG scored five goals in the first half as Draxler whipped in a sublime left-footed volley from Mbappe’s cross from the right.

In the second half, Draxler repaid the favour to Mbappe, setting him up in the area, and the France striker scored with a crossed shot shortly before the hour.

Malcolm gave Bordeaux their second goal from a 90th-minute penalty, awarded for a foul on Jonathan Cafu.