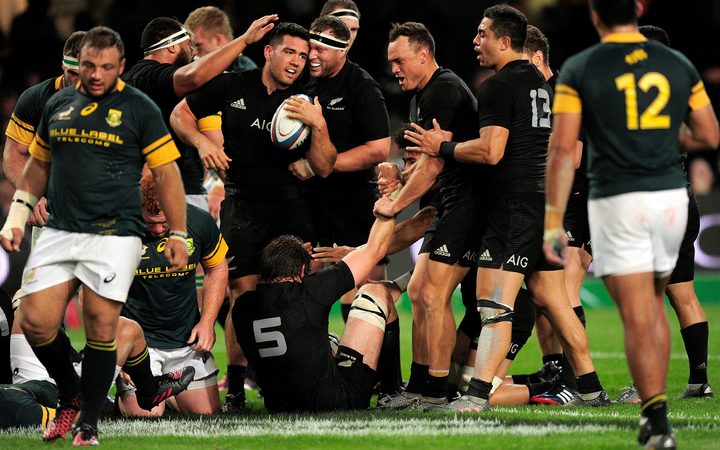 The All Blacks will start their World Cup title defence against the Springboks and Italy after being drawn in Pool B for the 2019 World Cup in Japan.

South Africa’s slump to seventh in the world means the 1995 and 2007 champions will face the All Blacks in the pool stage for the first time in a blockbuster clash.

The All Blacks will have to beat the Springboks to top their pool, as they bid for a hat-trick of titles.

The All Blacks and England, currently the top two teams in the world, would meet in a tantalising semi-final if they both win their pools and got through their quarter-finals.

New Zealand will likely play Scotland, Ireland or Japan in the quarter-finals.

All Blacks coach Steve Hansen said he was pleased to be in a group that would provide “some challenges”.

“South Africa are a team that knows us very well, we know them very well and there’s a lot of good history between the two teams,” he said.

“Hopefully we’ll both play really great rugby and inspire the tournament to go to a higher level.”

England were drawn in arguably the toughest pool for the second straight World Cup when they were grouped with France and Argentina in Pool C.

Pool C will be rounded out by the United States or Canada as well as one of Fiji, Tonga or Samoa with only the top two teams qualifying for the knockout stages.

Hosts Japan will take on Ireland and Scotland in Pool A at the start of Asia’s first Rugby World Cup.

Australia, twice champions and runners up two years ago, will become reacquainted with Wales in the easiest group Pool D, which also includes 11th ranked Georgia.

Only 12 teams were in the draw at Kyoto’s State Guest House with the other eight nations yet to qualify from various regional tournaments.

The ninth Rugby World Cup in Japan starts in September, 2019.

All Black prop Karl Tu’inukuafe​ back to the game?

The Fiji Pine Trust is collaborating with the government

FEO to file a complaint against Felix Anthony