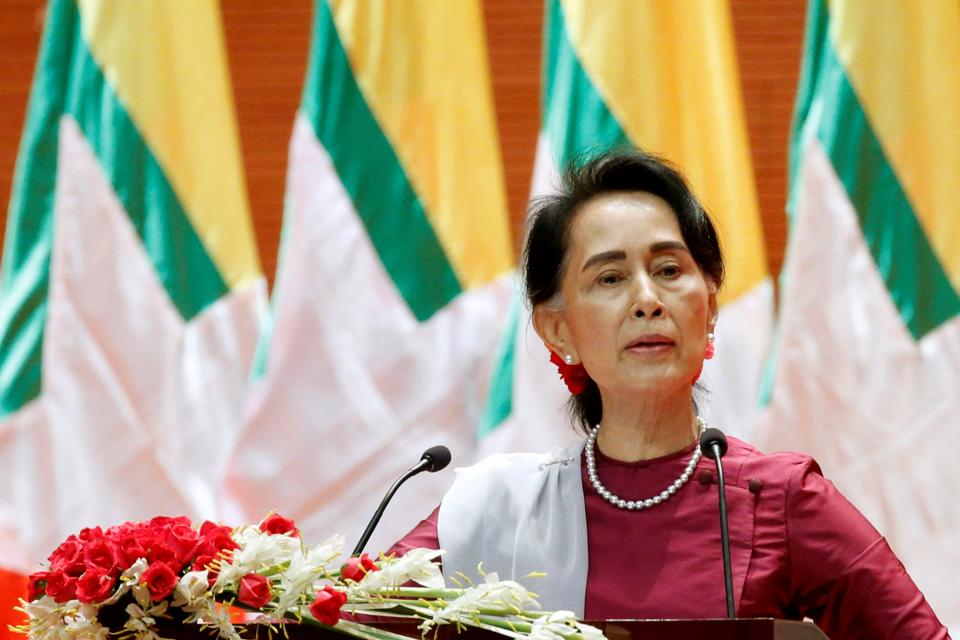 Updated: 8:06am – Myanmar’s leader has attracted increasing criticism for her apparent defence of the country’s treatment of its Rohingya minority.

The Oxford college where Aung San Suu Kyi studied as an undergraduate has removed her portrait from public display and placed it in storage, in a move that follows international criticism over her role in Myanmar’s humanitarian crisis .

The governing body of St Hugh’s college decided to remove the painting of the Nobel laureate from its main entrance on Thursday, days before the start of the university term and the arrival of new students.

In 2012 Aung San Suu Kyi was celebrated with an honorary doctorate from Oxford University, and held her 67th birthday party at the college where she studied politics, philosophy and economics between 1964 and 1967.

But in recent months Myanmar’s leader has attracted increasing criticism for her apparent defence of the country’s treatment of its Rohingya minority, who have suffered ethnic cleansing and violent attacks by Myanmar’s military forces.

In a statement St Hugh’s said: “The college received the gift of a new painting earlier this month which will be exhibited for a period. The painting of Aung San Suu Kyi has, meanwhile, been moved to storage.”

St Hugh’s student newsletter, The Swan, said the decision to remove the portrait was taken by the college’s governing body, which includes the college’s fellows and its principal, Dame Elish Angiolini.

But the move by St Hugh’s was described as cowardly by the Burma Campaign UK group, which urged the college to go further.

“This seems a rather cowardly action by St Hugh’s. If they have taken down the portrait because of Aung San Suu Kyi defending the Burmese military as they commit ethnic cleansing against the Rohingya they should say so and write to her urging her to respect human rights,” said Mark Farmaner, the campaign’s director.

The portrait, painted by the artist Chen Yanning in 1997, belonged to Aung San Suu Kyi’s husband, the Oxford academic Michael Aris. After Aris’s death in 1999 the portrait was bequeathed to St Hugh’s, and hung near the college’s main entrance on St Margaret’s Road in north Oxford.

The college’s other notable alumni include Theresa May, Nicky Morgan, the former education secretary, and Barbara Castle, a cabinet minister in Harold Wilson’s Labour governments.

As a leader of Myanmar’s opposition, Aung San Suu Kyi won a Nobel peace prize in 1991. Despite being barred from running for president, she won a decisive victory in the country’s 2015 election , and was eventually given a title of state counsellor.

Oxford council is to vote next week on stripping Aung San Suu Kyi of the freedom of the city it bestowed on her in 1997, when she was being held as a political prisoner by Myanmar’s military junta.

So far Oxford University has decided not to reconsider Aung San Suu Kyi’s honorary degree. But last week the university expressed its “profound concern” over the treatment of the Rohingya, a Muslim ethnic minority.

The university said it “hopes the Myanmar administration, led by Oxford alumna Aung San Suu Kyi, can eliminate discrimination and oppression, and demonstrate to the world that Myanmar values the lives of all its citizens”.

Hayne to be the man to watch in RLWC semis