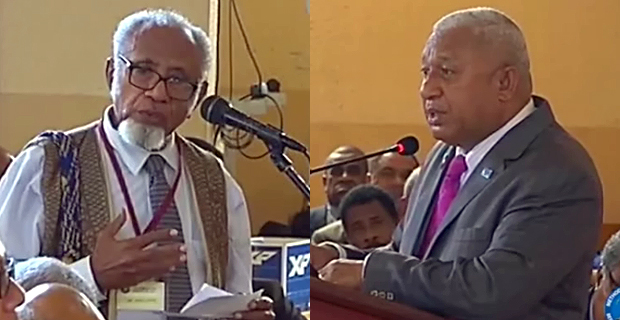 UPDATED: 6:15am – This is not the place and time to bring up politics.

This was stressed by Prime Minister Voreqe Bainimarama at the Methodist Church Conference after Reverend Akuila Yabaki asked the Prime Minister if the government can look after the electricity sector so that it can be equally distributed to the rich and the poor of the country.

He also asked the Prime Minister on what laws are in place to address the usage of electricity. Yabaki said that he opposed the Fiji Electricity Bill that was passed by parliament when he was the Chairman of Ecumenical Centre for Research, Education and Advocacy.

The Prime Minister was presenting an update of the government’s preparations towards the Conference of the Parties 23 to the leaders of the Methodist Church in Fiji.

It was during a question and answer session with the Prime Minister that Yabaki raised his concern about electricity.

While responding to Reverend Yabaki’s concerns, Bainimarama says the Church Conference is not to be used as a platform for political talks but a place to discuss issues of important interest.

Bainimarama says if Reverend Yabaki wants to talk about the initiative to try and reduce electricity usage, he should talk about it at the right time and place.

He says the government is also trying to open new hydro dams to reduce the burden on the Fiji Electricity Authority on trying to operate the big generators at Kinoya which is currently being operated by diesel.

Bainimarama says government is also investing in solar panels to help villages and communities in the outer islands.

FIJI NEWS: COVID-19 Coronavirus has taught us to look at alternative forms of employment

NATIONAL NEWS:- The mother of a psychiatric patient who died in...