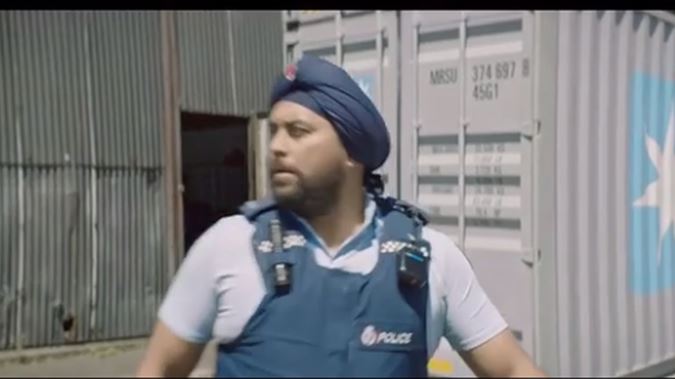 Updated: 6:48am – A Samoan police officer wearing an incorrectly wrapped turban in a popular police recruitment video is concerning to a Sikh community leader.

Rajinder Singh, secretary general of the Supreme Sikh Society of New Zealand, said police “violated tradition” because the officer was not Sikh and the turban was wrapped wrong.

Singh said he appreciated diversity in the video, but wished a Sikh officer had been portrayed wearing the turban instead of Constable Heber Gasu, who is Samoan.

Gasu can be seen wearing the turban as he races through a container yard, hunting a perp.

There are about 25 Sikh police officers in New Zealand.

“[Gasu is] not a Sikh actor, no. You can easily see that, the features, the turban, even the way the face looks.

“If you had a Sikh actor, he would know how to tie the turban.”

A police spokeswoman confirmed Gasu was not a practising Sikh, but said he “especially identifies” with the Sikh community.

There was no intention to cause disrespect to the community, she said.

“His close association to the Sikh community has enhanced trust and confidence and he recently received an award for his community work.”

Wearing a turban on occasion was part of Gasu’s embracing of Indian culture, the spokeswoman said.

He is also part of a police group which performs a Sikh cultural dance at police and community events.

Constable Mandeep Kaur, an ethnic relations officer and practising Sikh, said Gasu had worn the turban often as a mark of respect to the Sikh community.

“I feel honoured that a non-Sikh officer wanted to wear turban for our recruitment video to showcase NZ Police as a place where diversity is accepted by your colleagues.”

There was no intention to cause offence, but rather to show police welcomed all religions and backgrounds, the police spokeswoman said.

Police had dealt with one complaint regarding the matter, she said.

The video has been watched millions of times in November and the response was mainly positive, although international media outlet Al Jazeera questioned whether the organisation should be “bragging about its diversity” due to criticism about racial profiling, especially of Maori.

Seventy staff members, including Commissioner Mike Bush, put their hands up to be involved in the video.

Police wanted to “attract more women, Māori, Pacific Islanders, and people from all other ethnicities and backgrounds to better reflect the communities we serve,” Bush said.

Running for two and a half minutes, the video stars a huge range of police staff “in a fun, fast-paced sequence” and features all the different facets of police work, from the Armed Offenders Squad, to the dive and dog squads, the Eagle helicopter and youth aid officers, as well as frontline work.