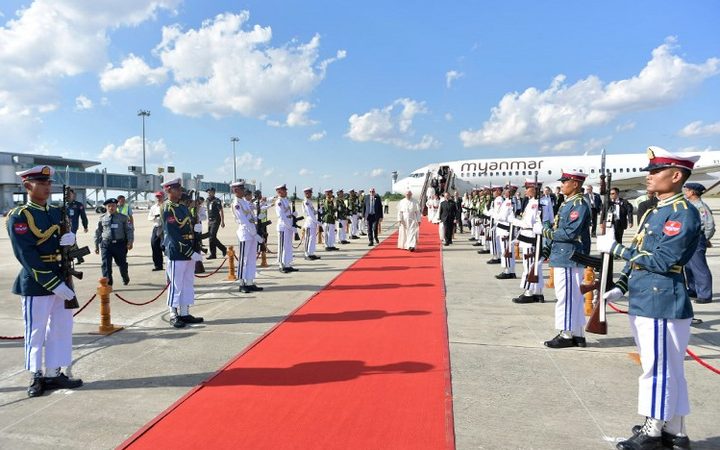 Updated: 6:37am – Pope Francis has delivered a speech in Myanmar, saying its people “continue to suffer from civil conflict and hostilities” but without referring specifically to its Rohingya people.

Rights groups had urged the Pope to use the term to back the Muslim community. However, the Catholic Church in the country had told him the term could cause difficulties for Catholics.

Myanmar has been accused of ethnic cleansing, with 620,000 Rohingya fleeing to Bangladesh since August.

Pope Francis held talks with Myanmar leader Aung San Suu Kyi on Tuesday, the second day of a visit fraught with tension after the United States accused the Southeast Asian nation of “ethnic cleansing” against its Muslim Rohingya people.

The pope earlier met leaders of several faiths in the majority-Buddhist country, calling for “unity in diversity” but making no mention of the Rohingya who have fled en masse to Bangladesh since a military crackdown began three months ago.

The leader of the Roman Catholic church will also travel to Bangladesh, where more than 620,000 Rohingya have fled to escape what Amnesty International has dubbed “crimes against humanity”.

Myanmar’s army has denied accusations of murder, rape, torture and forced displacement that have been made against it.

“Unity is always a product of diversity,” Francis told leaders of the Buddhist, Islamic, Hindu, Jewish and Christian faiths in the city of Yangon, according to Vatican officials who gave a briefing on the 40-minute meeting.

“Everyone has their values, their riches as well as their differences, as each religion has its riches, its traditions, its riches to share. And this can only happen if we live in peace, and peace is constructed in a chorus of differences.”

Aye Lwin, a prominent Muslim leader who was at the meeting, said asked the pope to appeal to Myanmar’s political leaders “to rescue the religion that we cherish, which could be hijacked by a hidden agenda.”

Only about 700,000 of Myanmar’s 51 million people are Roman Catholic. Thousands of them have travelled from far and wide to see him and more than 150,000 people have registered for a mass in Yangon on Wednesday.

The pope later flew to the capital, Naypyitaw, where he met President Htin Kyaw, writing in the guest book at the presidential palace: “On all the beloved people in Myanmar, I invoke the divine blessings of justice, peace and unity.”

He then went into talks with Suu Kyi, the Nobel peace laureate and champion of democracy who has faced criticism from around the globe because she has expressed doubts about the reports of rights abuses against the Rohingya and failed to condemn the military.

Both Francis and Suu Kyi were due to make speeches later.

His trip is so delicate that some papal advisers have warned Francis against even saying the word “Rohingya”, lest he set off a diplomatic incident that could turn the country’s military and government against minority Christians.

The Rohingya exodus from Rakhine state to Bangladesh began in August, when Rohingya militants attacked security posts and the Myanmar army launched a counter-offensive.

Myanmar does not recognise the Rohingya as citizens nor as members of a distinct ethnic group with their own identity, and it even rejects the term “Rohingya” and its use.

Many people in Myanmar instead refer to members of the Muslim minority in Rakhine state as illegal migrants from Bangladesh.

Francis is expected to meet a group of Rohingya refugees in Dhaka, the capital of Bangladesh, on the second leg of his trip.

The pope has already used the word Rohingya in two appeals from the Vatican this year.

A hardline group of Buddhist monks, previously known as Ma Ba Tha, said on Monday it welcomed the pope’s visit but warned, without elaborating, of “a response” if he spoke openly about the Rohingya.