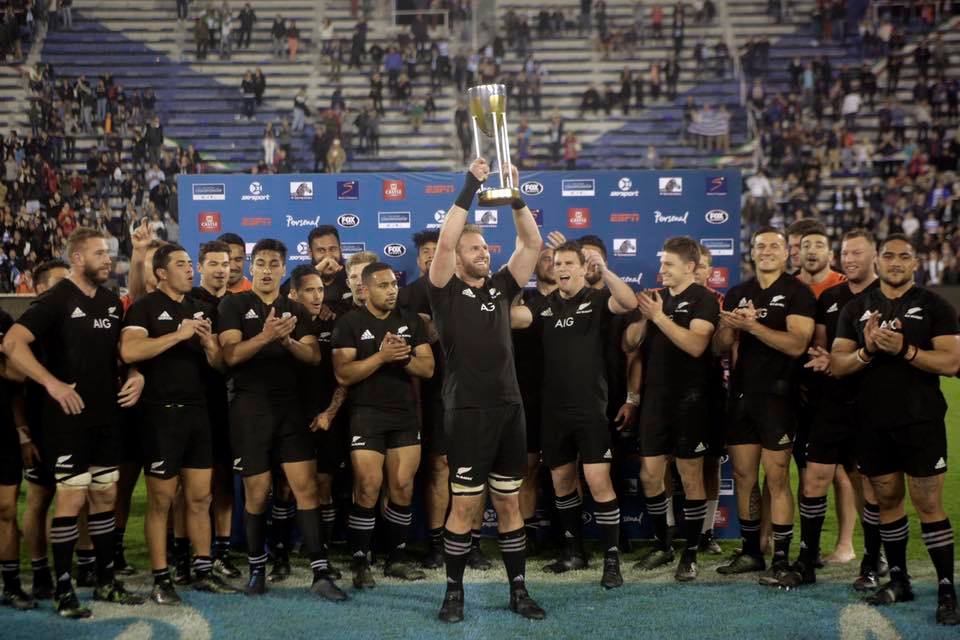 Updated: 7:06am – All Blacks captain Kieran Read, after his side’s 36-10 win in Buenos Aires on Sunday (NZT), paid credit to the way Argentina were able to put pressure on them whenever they played in the Investec Rugby Championship.

It wasn’t until injury time in the second half the All Blacks were able to advance from the 29 points they took into half-time as the home side niggled away to disrupt the flow of the New Zealand game.

Read said the All Blacks defended very well and they hadn’t been helped by two yellow cards.

“We really kept them out, we had to defend our hearts out so really proud of the lads,” he said on SKY Sport.

The occasion, and the venue with its unique atmosphere helped the learning experience for the side, and he said there had been some good touches, including a try on debut for Crusaders team-mate David Havili.

Read said the scrum, which had Argentina under pressure all game, had been working well all through the Championship and it was a weapon for the side at the moment.

“We can use it when we see fit, like at the end there [when Havili scored] to make them stay on the scrum and score some tries, so it’s going well,” he said.

Props Nepo Laulala and Kane Hames had been around a few years now and understood coming into the Test side that all they had to do was their job and that was part of the evolution of the All Blacks’ game.

“It’s exciting times for us but I’m really proud of the way we did it tonight,” he said.

Coach Steve Hansen said it had been a good first half and ‘a fairly ordinary second half’ but there had been a lot of good things in the display: some nice tries, some nice plays on attack, great defence and they had overcome being without yellow-carded players for 20 minutes.

“Little things like our hard-ball gets we were really good there and we had real physicality up front which was great without Sam Cane, Sam Whitelock and Brodie Retallick, it was really pleasing,” he said.

There was some immaturity in the performance but that had to be expected when less experienced players were given the starts, he said.

“We’ll learn from it and grow from it, we’ve just built some more depth,” he said.

Hansen said the yellow card to Read was for something he should know better about and the side had let indiscipline creep into their effort which had allowed Argentina back into the game.

“I’m really happy, we’ve got another bunch of guys who have been in a tough place to play, everyone that’s played here knows that, and they’ve come away and learned some lessons from that and we’ll grow.

“It is a difficult place to play. The crowd gets in your head and when you’re young and up by a few points you start forgetting that you’ve got to go forward to earn the right to do that so it’s all good. We’ll take away the lessons and look forward to next week,” he said.
Lock Luke Romano said he wouldn’t forget his first game in Buenos Aires for the atmosphere and the crowd but the All Blacks were scratchy in the second half and that was due to the pressure the Argentine side put them under.

“They played some awesome footy. You could see it where they keep the ball alive and they make it hard to get our defence set. They’re a great team and I’m sure you’ll see them knock over some of the big guns in the world in the near future,” he said.

The best part about the win was that there was still areas the side could strive to improve, he said.

Sonny Bill Williams said the All Blacks were probably guilty of not respecting Argentina enough when they were out to a 29-3 lead.

“That’s when we’ve really got to nail down our processes and scale the game back a bit,” he said.

There was plenty for the All Blacks to take from the game and while there was an expectation they could perform at maximum all the time there needed to be credit given to Argentina for the way they fought back.

And there was always next week to think about when the pained Springboks would be waiting for the All Blacks in Cape Town, he said.

Player of the match Damian McKenzie said in the first half the side were playing with an attacking mindset and they had kicked well but the second half had been a lot tougher.

“They came out firing in that second half and put some real pressure on us defensively and we were trapped down our end of the half for a lot of the second half. Credit to the boys they stuck it out and we managed to get a meat pie for Davey [Havili] in the end,” he said.

Winter ills fill hospitals: ‘We simply haven’t got the space’ |...