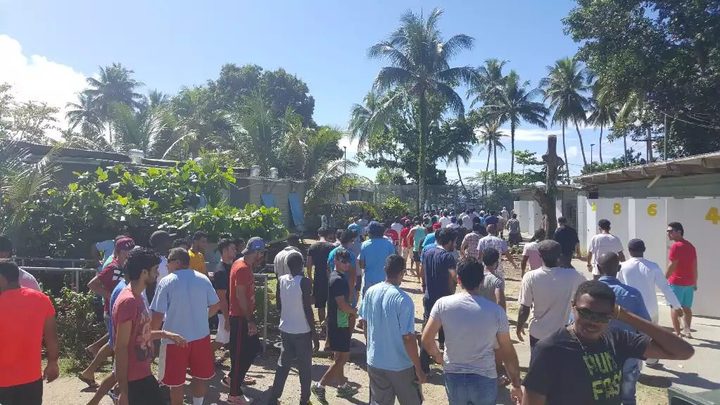 UPDATED: 6:58am – Protest action has entered a second day at the refugee prison camp on Papua New Guinea’s Manus Island.

On Wednesday, speakers addressed a rally of about 900 detainees demonstrating against moves to evict them.

After four years, the Australian-run facility must close by November under Papua New Guinea law. The men, who sought asylum in Australia, say they are being forced to settle in Papua New Guinea.

Power and water were cut to the camp’s Foxtrot compound this week,

but refugees are refusing to move to the Transit Centre in nearby Lorengau. Iranian refugee Amir Taghinia said at yesterday’s rally that Australian media was censoring news of the protest.

“Power and water mean nothing. Even if they cut the food we are not going to go to Lorengau,

we do not want to be settled in PNG,” he said. Kurdish journalist Behrouz Boochani reported the protesters shouted at the Australian government for freedom.

The men also marked the first anniversary of the death of Pakistani refugee Kamil Hussain, who Mr Boochani said had drowned while being “held against his will in an Australian concentration camp.”

Nearly 200 airports across the UK and Europe are at risk