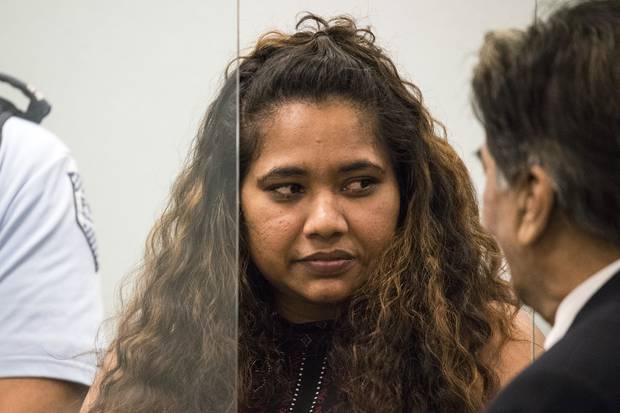 Updated: 6:11am – Police have considered charging the hundreds of men who had sex with a teenage girl forced into prostitution by her own mother – but say they will not, to protect the victim from further suffering.

Last week Kasmeer Lata was jailed for almost seven years for using her teenage daughter as a sex slave and selling her body to men about 1000 times over a two-year period.

Lata is only the third person to be convicted for slave trading in New Zealand’s legal history.

She sold her daughter as many as five times a day, charging men up to $200 per session.

The first time her daughter was forced to have sex with a man for money was on her 15th birthday.

The teen, who has permanent name suppression, fled to police in November 2016.

After the pair appeared in court last week questions were asked about the men who paid for sex with the teenager.

Some people were outraged that the men had not been prosecuted and others criticised police for not investigating them.

Detective Inspector Colin Higson explained to the Herald that taking the men to court – if they could even be identified – was not an option.

“Police considered the liability of the men involved in the sexual exploitation of the young person during the investigation,” he said.

“The offences are ‘strict liability’ offences under the Prostitution Reform Act 2003 but would still require any charge laid to be proven to gain a conviction.”

Higson said the transactions between the men and Lata – for sex in her Papatoetoe home, motels and other locations – were “almost exclusively made in cash”.

That made it “extremely difficult” for police to identify any of the men who paid for the teen’s sexual services.

“Throughout the investigation a number of men were interviewed by police, but it was not possible to establish that they offended against the victim in this case,” said Higson.

“Ultimately, the only way to prove the identity of the men involved would be for the victim to identify and potentially be called to give evidence against each of them.

Higson said the police investigation and prosecution was focused entirely on the primary offenders – Lata and her partner.

“[They] abused their position of trust by exploiting this young person.

“The overriding factor in this case was the views of the victim, who made it clear that she wanted to take proceedings against her mother and partner.”

Last week the victim told the Herald she wanted only one thing when she went to police – for her mother to apologise for her wrongdoing.

“I just wanted my mother to acknowledge what she had done. By pleading guilty she showed me that she was sorry – that she knows what she has done is wrong,” she said.

“Now it’s over – everything is over and I am free to live the life I always wanted to have. I was scared to death, but now I am comfortable.”

Justice Matthew Muir said Lata’s offending had caused “long-lasting, if not irreparable damage to her daughter” as she “effectively pimped her out”.

Fiji 7s team continue to focus on their strengths ahead of...