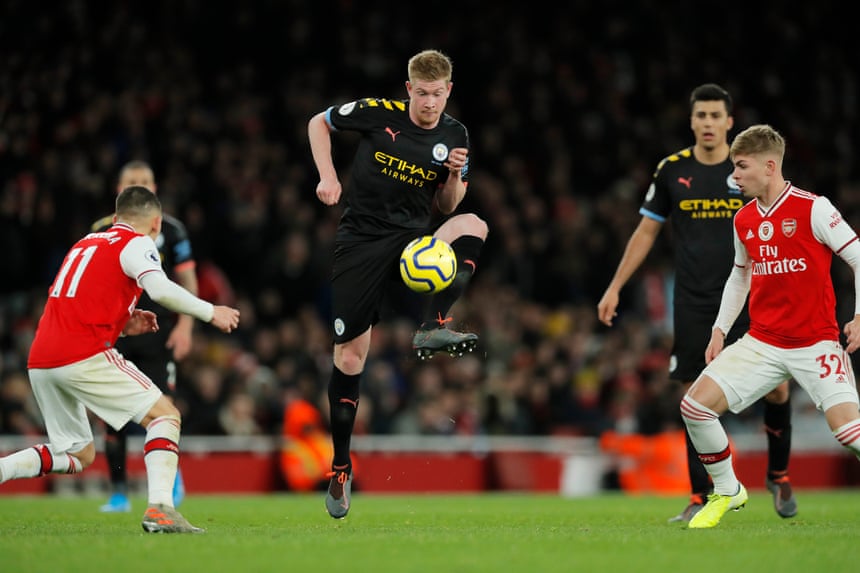 To Pep Guardiola, attack has long felt like the best form of defence and, when the Manchester City manager can call on Kevin De Bruyne in form such as this, it all makes perfect sense. City’s title defence has foundered on problems at the back but they did not have to worry about anything in defensive terms here. Those concerns belonged to Freddie Ljungberg and Arsenal, during a performance of weakness, looseness and naivety.

It was Ljungberg’s first game against an elite-level rival but, if he was auditioning for why he ought to be made the permanent managerial successor to Unai Emery, he fluffed his lines comprehensively. For years – going back to the end of Arsène Wenger’s tenure – Arsenal have been accused of having a soft underbelly; of being too easy to play against. They had no defence to the charge here.

Time and again, De Bruyne ran at them, spreading panic in their ranks and the City attacking midfielder had the end product to lift his team to what was only a third Premier League win in six. De Bruyne scored twice in the first half and laid on another for Raheem Sterling and the hard truth was that he and City could have had more.

On the occasion of Guardiola’s 200th City game, his team played some lovely football, almost of all it through De Bruyne, and the Emirates, which is always a shouty and unhappy place when results go bad, was pockmarked by empty seats long before full time. The home support had booed their team off at the interval. By the end, there were merely resigned shrugs. It is stating the obvious to say that Arsenal’s issues predate Ljungberg. But can he truly claim to have changed anything for the better?

It took City precisely 90 seconds to open the scoring and expose the first outbreak of passive Arsenal defending. Fernandinho stepped away from Nicolas Pépé’s non-challenge before playing a pass up the inside-left channel, where Gabriel Jesus reached the ball too easily ahead of Calum Chambers. What happened next, though, was all about the purity of De Bruyne’s technique. Jesus’s pull-back was bouncing but De Bruyne guided his first-time shot unerringly into the roof of the net from just inside the area.

De Bruyne enjoyed himself throughout. There was a moment in the 20th minute where it took four Arsenal players to dispossess him but, by then, he had driven the transition that led to City’s second. What a lovely move it was, starting on the edge of their own area when Rodri intercepted a pass from Pépé.

Rodri found Phil Foden, who was starting in the Premier League for the first time this season and, from there, City played their way out to De Bruyne through Benjamin Mendy, Rodri and Foden again. De Bruyne swapped passes with Jesus and, when he ran into the left-hand side of the area, Arsenal’s defenders were visibly unnerved. Ainsley Maitland-Niles and Chambers did not want to do the wrong thing and so they ended up doing nothing, stepping off De Bruyne, which was a very bad idea. De Bruyne’s cross deflected and Sterling tapped home at the far post.

Guardiola played Foden off the left, which is not the 19-year-old’s favourite position, although he still showed his ability on the ball. But City’s performance was all about the cut and thrust of De Bruyne who, in a No10 role, was freed of some of the defensive responsibilities that he would usually have as a No 8. He embraced the liberation.

Arsenal could get precious little going in attacking terms, save a couple of flickers from Gabriel Martinelli on the left. He might have scored on 33 seconds after getting the better of Nicolás Otamendi and Fernandinho only to see his shot beaten away by Ederson. It would be Arsenal’s only shot on target.

It was all over when De Bruyne scored his second – and City’s third – and it was a moment to sum up Arsenal’s dysfunction. Sead Kolasinac had limped off and, with the substitute, Bukayo Saka, taking time to strip, Arsenal were playing with 10 men when the travelling support erupted again in De Bruyne-inspired delight.

Foden played the pass for De Bruyne and, yet again, the defensive resilience was conspicuous only by its absence. De Bruyne shrugged off Matteo Guendouzi as though he were not there before bending a wonderful curler into the bottom corner. De Bruyne would be denied a first-half hat-trick when Bernd Leno tipped another curling shot from him on to the post and away. It was an excellent save.

The second-half was a non-event, City having done more than enough before the interval, but they might have deepened Arsenal’s pain. Ljungberg looked on in horror when Chambers, the last man, was robbed by Jesus only for Leno to bail out his team with a one-on-one block and the goalkeeper would deny the substitute, Riyad Mahrez, at the end. Jesus had earlier shot high while De Bruyne, having run and watched defenders back off, had a shot blocked by Chambers.

It is traditional to point the finger at Mesut Özil at times like these and the Arsenal No 10 was anonymous. The cleanest connection he made on anything was when he booted away his gloves upon his substitution. He was not the only Arsenal player who needed to take the proverbial long, hard look.

All uphill for the Wallabies in Dunedin | NZ FIJI TIMES

NATIONAL NEWS: – Auckland student brings gun to university to ‘use...