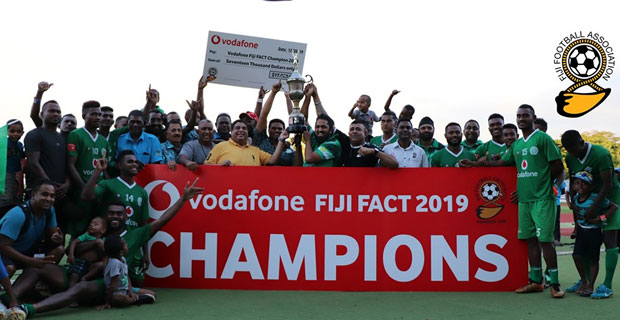 The Jacks Nadi soccer team has claimed the 2019 Vodafone Fiji FACT title after they defeated Suva 2-1 in the final.

Nadi was trailing behind Suva 1-0 at halftime. Rusiate Matarerega equalized the scores in the 40th second of the second half.

The second goal for Nadi was netted through a shot by Jaishal Kumar which was deflected by Remueru Takiate of Suva. Kumar has dedicated this win to his mother who has been his strength throughout.

Christopher Kumar from Nadi was red carded for a foul on Suva’s Epeli Lairoti. Nadi with this win has taken home $17,000 prize money.

NATIONAL NEWS: Finally return home today for some New Zealanders stranded in India since the outbreak

NATIONAL NEWS:- ‘Summer isn’t quite here yet’: Stormy start to the...

WORLD NEWS: Nations are finding a way to keep away from...