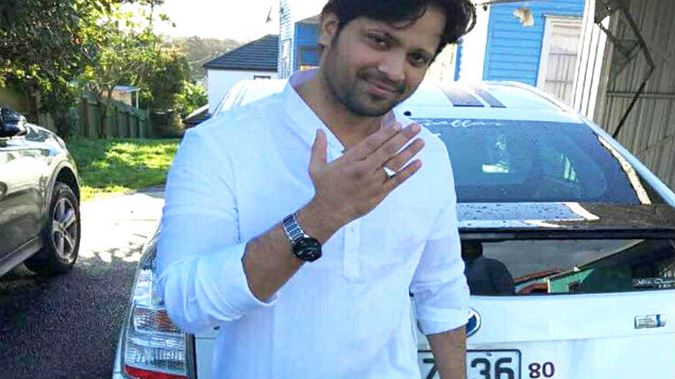 Updated: 9:43am – The taxi driver who died after an allegedly drunk driver slammed into his car in central Auckland had recently become a dad.

Abdul Raheem Fahad Syed, 29, fed and put his 5-month-old son Syed Abdul Rehman to bed before he started work about midnight on Friday.

Just over four hours later he was killed when a black Mercedes allegedly ran a red light and hit his Toyota Prius, badly damaging the driver’s side.

Close friend Mohammed Kazim, who worked for Discount Taxis with Syed, had been on the phone to him not long before the crash on Symonds St.

Kazim said Syed’s wife had been left devastated by the news of the tragedy.

“She couldn’t even stand, there were two ladies holding her.”

Syed’s wife Nishat Abedi told Fairfax that he was “the best father there ever was”.

“He was a really hard working person. We were both dependent on him. He was the only one working,” she reportedly said.

She was told by police at 10am that her husband was dead, Fairfax reported.

“I knew he had been in an accident. I knew something was up.”

Kazim told the Herald on Sunday he had earlier became concerned after Syed stopped answering his phone so decided to track his friend’s car on the Discount Taxi internal app, which shows the location of drivers.

“It was showing him on Symonds St … and then I saw [something] on the app about a crash and I got worried … so I went to the road and saw his car,” said Kazim who recalled the constant flashing of emergency lights.

Desperate to know if his friend was okay, Kazim asked police at the scene what had happened. Unable to get any answers, he decided to go to Syed’s house in Avondale to see if his wife Nishat knew anything.

It was there that Kazim found out his friend had died at the scene of the crash.

“I was really sad, like broken. I was shocked,” he said.

Family and friends were making arrangements to get Syed’s body back to India, where his parents and older brother live.

Fairfax reported the pair shifted to New Zealand from India so Abedi could study. After her studies she fell pregnant. Because she is not a permanent resident, she will have to reapply for a visa in February.

A 20-year-old man has been arrested and charged with drink-driving and other offences in relation to the smash, which happened about 4.45am.

The driver of the vehicle and a passenger allegedly fled the scene after the crash and were found only with the help of members of the public, police and the Eagle helicopter.

He told reporters the crash was avoidable.

Taxi drivers in central Auckland spoken to by the Herald on Sunday last night expressed sadness that one of their own had lost his life while on the job.

Kazim said Syed was a “really hardworking” man who adored his son.

“He was a very friendly person, he cared about his family.”

Kazim said he would be taking some time off work to recover from the loss of his friend.

“I used to talk to him like every day. He was really close to me. We used to start shifts together and then finish together.”

Syed and his wife had moved to New Zealand from Hyderabad, the capital of India’s Telegana state, about three years ago, according to Kazim. The pair have no family here.

But with no one aware of the crash Kazim rushed to Auckland Hospital to see if Syed had been admitted.

“Then I contacted my other friend and they said to come to the police station,” said Kazim.

Binpinkumar Tavidia, who works for Auckland Co-op Taxis, said he had encountered “quite a few idiot drivers” in the 11 years he’d been driving taxis.

Due to the dangerous driving he had seen at night, Tavidia, who is married with three children, now only drives during the day.

Syed’s death was the first within the Christmas holiday road toll period, which began at 4pm Friday and ends at 6am on January 3.

The holiday toll is at four, after other crashes in Northland, Hanmer Springs and Hawke’s Bay.

So far year, 371 people have died on New Zealand roads, the highest number since 2010.

The figure at this time last year was 311.

Police and the NZTA launched a joint road safety campaign “We Want You Here For Christmas” at the start of December aimed at reducing fatalities.

Featured image: Abdul Raheem Fahad Syed, 29, was killed when his taxi was smashed into by an allegedly drunk driver who ran a red light. (Photo: Mehraj Khan, Radio Tarana)