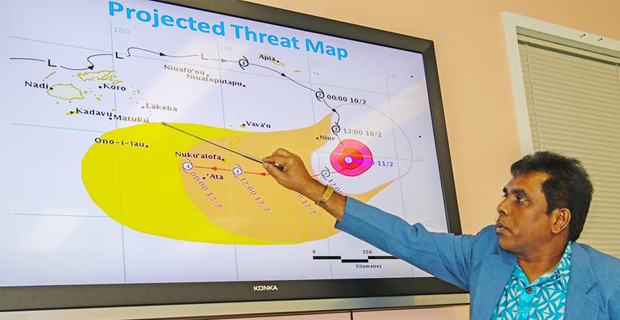 Updated: 9:21pm – A Tropical Cyclone Alert is now in force for Ono-i-Lau, Vatoa, Fulaga and nearby islands.

Director Fiji Meteorological Services Ravin Kumar has confirmed in a media briefing this afternoon that Severe Tropical Cyclone Gita is located 230km Southeast of Niue, or about 1090km East of Ono-i-Lau as at 12pm today.

He says that the alert is now in force to allow at least 36 to 48 hours before the onset of damaging gale force winds adding that this is moving South Southeast at about 20km/hr and is expected to turn Southwest wards to track towards Southern Tonga and the Southern Lau Group.

Kumar says that Severe Tropical Cyclone Gita is expected to further intensify into a Category 4 system in the next 18 to 24 hours.

He says that on the projected track Severe Tropical Cyclone Gita is anticipated to affect Southern Tonga and may enter Fiji waters tomorrow night and pass South of Ono-i-Lau as a Category 4 system on Tuesday night.

Kumar says that before it approaches strong winds can possibly expand to the whole of Fiji while damaging gale force to strong force winds can expand over the Western and Southern parts of Fiji as it comes closer.

Kumar says that the Nadi Weather Office will continue to monitor the system as it comes closer and as new information comes on hand the projected tracks will be adjusted.

He has stressed that people to listen to weather bulletins, remain alert and be prepared at all times adding that should the stronger winds expand the Weather Office will adjust the projected tracks as the information comes on hand.

WORLD NEWS: The Australian state of Victoria has declared a state of disaster

World News: US carrier group was not steaming straight to North...

FIFA U-17 World Cup: In the land of rugby, football slowly finding...