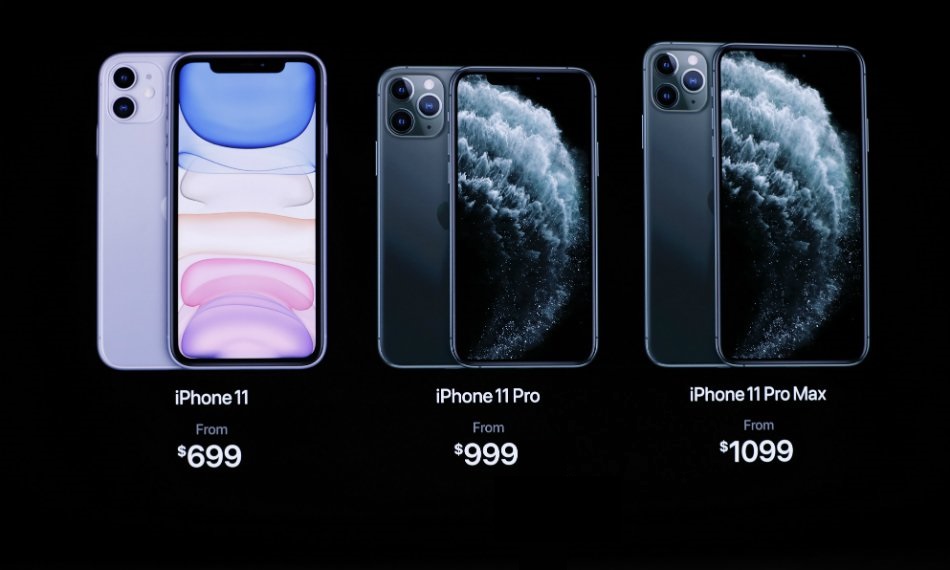 Apple introduced the iPhone 11 (from $1349), and iPhone11 Pro (from $1949) and iPhone Pro Max (from $2149) at its product launch event in Cupertino, California overnight as Apple seeks to spur new upgrades in a slumping global smartphone market.

The new iPhones resemble recent models, but with better cameras and new colours. Apple announced it will still sell older models for less; the iPhone 8 will now cost from $869 and the iPhone XR now costs from $1149.

New models of the Apple Watch and iPad were also revealed, and a launch date – November 1 – was announced for its original video offering, Apple TV+.

The new model features the fastest chip of any smartphone, and a powerful new battery that lasts an hour longer than the iPhoneXR. A new triple-camera system provides a pro-level camera experience with an Ultra Wide, Wide and Telephoto camera, delivering improvements to low-light photography and offering the highest quality video in a smartphone that is great for shooting action videos.

The triple-camera system takes Portrait mode to a new level with the ability to choose Wide and Telephoto framing, enabling Portrait mode with a wider field of view, great for taking portraits of multiple people. The Telephoto camera features a larger ƒ/2.0 aperture to capture 40 percent more light compared to iPhone Xs for better photos and videos.

The iPhone 11 allows users to easily record video without switching out of Photo mode with QuickTake, by simply holding the shutter button to start recording. The iPhone 11 comes in several new colours including green, yellow and purple. The new TrueDepth camera introduces a new 12MP camera with a wider field of view to capture selfies, and next-generation Smart HDR enables more natural-looking photos. Everyone’s selfies are about to get better with the TrueDepth camera that now records 4K video at up to 60 fps and 120 fps slo-mo.

Pet lovers will be thrilled that “portrait mode” now also works with animals, not just humans. Meanwhile the Pro model gives users four extra hours of battery life per day. The iPhone 11 comes in several new colours including green, yellow and purple. The September 10 (US time) launch date could mean the new iPhone model will be in-store as soon as Friday, September 20.

Also unveiled was Apple’s next internet-connected smartwatch, Apple Watch Series 5, which features an always-on display that lets users check time and other features without raising or tapping it. Many competing watches already have that.

New location features, from a built-in compass to current elevation, help users better navigate their day, while international emergency calling allows customers to call emergency services directly from Apple Watch in over 150 countries, even without iPhone nearby.

Combined with the power of watchOS 6, users are empowered to take charge of their health and fitness with new features like Cycle Tracking, the Noise app and Activity Trends. Apple is also introducing a new Apple Research app that lets users sign up for studies and a Compass app for gauging location. New titanium and ceramic models will be available. Apple Watch Series 5 (GPS) starts at $729. There was no immediate word on NZ availability for the GPS + cellular model, which NZ missed out on for the Series 4 because of lack of local phone company support for e-sims.

Apple also set launch dates for its original video offering, Apple TV+, and its game subscription service as the tech giant ramped up efforts to reduce its dependence on the iPhone. The TV+ service will launch November 1 in more than 100 countries at $4.99 per month and will include a “powerful and inspiring lineup of original shows, movies and documentaries.” Apple is featuring scripted dramas, comedies and movies as well as children’s programs in the service, which will compete against streaming giants like Netflix and Amazon.

“With Apple TV+, we are presenting all-original stories from the best, brightest and most creative minds, and we know viewers will find their new favorite show or movie on our service,” said Zack Van Amburg, Apple’s head of video.

Apple said customers who purchase an iPhone, iPad, Apple TV, iPod touch or Mac will get the first year of the service for free. The company’s online gaming subscription service, Apple Arcade, will launch next week, offering exclusive titles for mobile and desktop users. The new service, which will also cost $4.99 per month, will include more than 100 game titles made for Apple devices.

“You can’t find these games on any other mobile platform or subscription service, no games service ever launched as many games, and we can’t wait for you to play all of that,” product manager Ann Thai told the Apple media event in Cupertino, California.

Apple managed to grow its overall revenues, albeit by a modest one per cent, to US$53.8 billion, even as iPhone revenues plunged nearly 12 per cent in the April-June period. The company delivered strong growth from digital content and services that include its Apple Pay and Apple Music, along with wearables and accessories like the Apple Watch and Air Pods.

Analysts warn that Apple still faces challenges as rivals chip away at the smartphone market, in which the iPhone’s share is less than 12 per cent. As the iPhone maker refines its handsets, other makers are pushing into new areas such as 5G devices and folding smartphones.

About a third of the 900 million iPhone users around the world are in an upgrade “window”, meaning a strong potential for handset sales, according to Ives. International Data Corporation (IDC) forecast that this will remain a challenging year for iPhone sales, mostly due to a mature market and lack of handsets tailored for budding 5G telecom networks. IDC expected Apple to hit the market with 5G iPhones next year, and have an edge due to a better understanding of the market.

China accounts for about 17 per cent of Apple sales overall, and has tremendous room for growth, according to Techsponential analyst Avi Greengart. The trade war between the US and China has complicated Apple’s effort to gain ground in that market, where gains by local titan Huawei have come partly at the California-based company’s expense.

FIJI NEWS: The discovery of more than 200 plants believed to...

Rakiraki football fans wants to watch their team in their home...