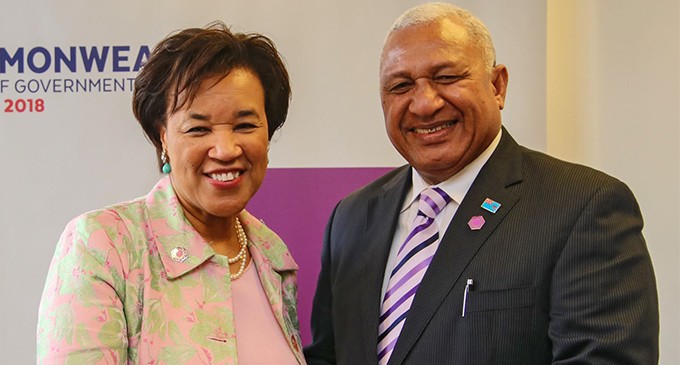 Baroness Scotland said the Commonwealth continued to stand behind the Fijian Government’s leadership in the fight against climate change through Fiji’s Presidency of the 23rd Conference of Parties (COP23), adding that the Commonwealth would facilitate action teams to work together for the Commonwealth Blue Charter Fund.

The Secretary-General conveyed the Commonwealth’s gratitude for the successful hosting of the 20th Conference of Commonwealth Education Ministers (CCEM), held in Nadi earlier this year. CCEM involved the arrival of education ministers and their delegations from throughout the Commonwealth in Fiji, the first Pacific Island to play host to the influential meeting. Fiji’s CCEM was widely hailed as a success by the international community.

During their meeting, the Prime Minister provided Baroness Scotland with an update on Fiji’s COP23 presidency and the implementation of its outcomes, and indicated that the Talanoa Dialogue introduced by Fiji in Bonn last year will continue when Poland is handed the COP presidency. He highlighted the country’s plans for celebrating the 50th anniversary of Fiji’s national independence in 2020.

Their discussions took place on the margins of the Commonwealth Heads of Government Meeting (CHOGM), which is currently underway in London, England.

CHOGM 2018 has brought together a diverse community of 53 nations to discuss shared global challenges and Prime Minister Bainimarama plans to build support among Commonwealth nations for the cause of decisive climate action in his capacity as President of COP23.

Prime Minister Bainimarama has a series of high-level forums and meetings during the week, where he is expected to meet his various counterparts in attendance to strengthen Fiji’s bilateral relations, build support for the global campaign for climate action, and promote Fijian business and trade.

Fiji’s attendance at CHOGM aims to attract investment, highlight the unique challenges of small states, and draw attention to the nation’s sustainable and resilient model of economic growth.

Prime Minister Bainimarama is joined by leaders from around the Commonwealth, where Heads of Government are gathering to address shared global challenges and work toward securing a better future.

CHOGM stands as an opportunity for Fiji to once again stand out on the global stage. Throughout the week, Fiji will have a voice at numerous business forums, take part in investment and trade events and launch the nation’s Green Bond on the London Stock Exchange, among a string of other distinguished and impactful events.

The Prime Minister is accompanied in London by the Minister for Industry, Trade and Tourism Faiyaz Siddiq Koya and the High Level Climate Champion Inia Seruiratu.

Up to 10 tropical cyclones may hit Pacific before April