Home News Travel: The Azamara Journey: In search of dragons 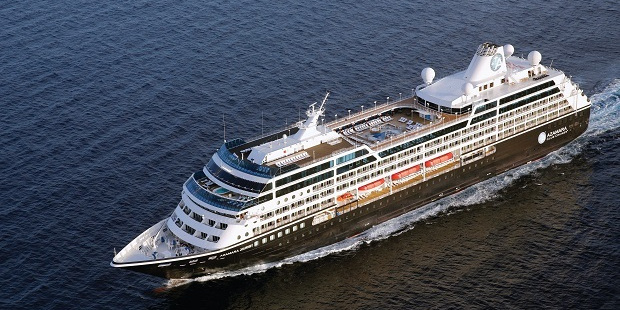 “Is this really your first time?” the charming Brit asks as he plies me with another drink.
Yes, I have to admit, it is.

I am asked the same question several times during this new way – for me, at least – to travel.

But after nearly three weeks on the Azamara Journey, I’ll feel like an old hand at this cruise stuff. I might not have “done the Med” or “the C’rib”, but I will have a favourite voyage. Azamara Club Cruises’ lovely ship, Journey, rocks.

I talk with people who are hardly ever off a cruise ship, and others who afford their travel by working hard and scraping by.

“We live for our holidays,” says one woman while we wait for available washing machines in the laundry room. (The higher-paying guests get a butler service, laundry included.) “We don’t buy new cars or need new furniture. This is what we spend our money on.”

Another woman, who has been on so many cruises she’s given up counting, has difficulty coming to terms with the Journey being “so small”.

“I keep wondering where the other half of the ship is,” she says.

Most like that the Journey and her twin sister, Azamara Quest, carry fewer than 700 guests.

But it’s the Journey’s itinerary, the 18-night Asia-Australia-Great Barrier Reef voyage from Singapore to Sydney, that most excites me. It includes Komodo island to see the extraordinary and rather sad looking dragons, and remote Thursday Island in the Torres Strait where Australian indigenous people’s land rights history was made only a quarter of a century ago.

We board in Singapore and spend two days sailing to Bali, where the Journey berths at Benoa Harbour, Denpasar, early in the morning.

With one day at every stopover, the ship’s shore excursions team organises trips at every port. Others have prebooked via the internet or take a chance on finding cheaper independent tour operators waiting near the gate. We’re off the ship quickly and by 7.30am have brokered a deal with Budha, a garrulous taxi driver who, for US$80, takes two of us on a sensory-overload tour.

We fit in traditional painting, wood carving, gold, silver and batik workshops/outlets and temples. Budha takes us up to Ubud where we visit the Sacred Monkey Forest Sanctuary, our entry fee and the price of a bunch of bananas skinning us but at least helping a conservation programme. The greedy, visitor-savvy monkeys snatch and grab, shimmy up legs and leap on to shoulders.

It’s not particularly nice to have a monkey on your head.

We eat at a Balinese-architecture restaurant overlooking colourful gardens and rice fields, then it’s down to the coast again, to a beach which lives up to the postcard pictures of this tiny, culturally diverse but mainly Hindu island in Indonesia. Of course, at that beach Budha’s very good friend has a shop with the best prices … Later, around the Journey’s pool bar, we compare deals and decide we got good value at US$40 each.

The Journey is a mid-sized cruiser, and the Azamara line promotes it and the Quest as boutique, luxury ships. It has an almost kitsch elegance and an atmosphere redolent of a bygone era of travel – a cruise with comfort, fun and genuine hospitality.

There are 600 passengers – they’re called guests – and nearly 400 crew on this inaugural voyage from Singapore to Sydney.

When the itinerary was announced, the very personable Captain Johannes Tysse tells us, it was the fastest selling cruise the company had ever advertised – this one and the back-to-backer which sees Azamara enter the New Zealand cruise route.

Many will stay on for the double whammy – after the Singapore to Sydney voyage, the Journey cruises first to Tasmania, crosses the Tasman to visit Milford Sound, Dunedin, Akaroa, Napier, Tauranga, Auckland and Bay of Islands before returning to Sydney.

Crew members I speak with are excited about the first trip to New Zealand. It’s a new excursion for the company fast gaining a reputation as one of the world’s best boutique cruise lines. Azamara is a subsidiary of Royal Caribbean,owner of the quantum class, 5000-passenger Ovation of the Seas.

Being much smaller, the Journey can get closer to destinations that don’t have ports or deep berths.

At Komodo the ship sits only 250m offshore from where passengers are tendered ashore.

We follow a guide, with a couple of locals coming along carrying long, forked sticks in case they need to stave off an attack, and we set out to “find a dragon”.

We do, of course, find several. After a 30-minute walk along tracks through the rainforest we come to a large clearing where earlier dragon-seekers from the ship already stand around making quite a lot of noise despite the guides requests for silence.

Inside the clearing, half a dozen monster lizards crouch in a desultory manner, their tongues darting menacingly, their front quarters propped up off the ground.

Every now and then one of them makes a quick move, lurching about two metres, looking set to lunge at the spectators before flopping back down. The guides issue warnings to the gobsmacked visitors and hold their sticks aloft, but it all seems more showy than scary.

On the track we pass bones, animal prints and, the guide cheerily points out, dragon poo. The bones could be from small deer that live in large numbers in the area, or other mammals, including the baby komodo dragons that adult males will eat. Or, I ask the guide, could they be from carcasses fed to the beasts to keep them full, lazy and in the area when tourists come by? He says he doesn’t understand the question.

It is the sweaty wet season in the tropics, a fact that has perhaps bypassed many of the Brits and Europeans on board who bemoan a lack of blue skies and sunbathing weather.

On Komodo, the heavens open and within minutes the dirt path is a fast stream swirling around our ankles. We see why the people build their houses on stilts. Some don the green, plastic ponchos they’ve been handed but it’s 35C despite the cool rain and I’d rather just be wet, not cooked. Everyone slips and slides through the deepening mud.

This excursion has been organised by the cruise line; tourists can’t just turn up on Komodo. The “entry fee” goes into conservation programmes that include moving juvenile lizards to out-of-bounds islands. And I don’t care that this excursion costs more than US$100, or that I am soaked and muddy. I’m sure I’ll never again visit Komodo, where there be dragons.

A week into our voyage, we slide in and out of Darwin – a gutsy, fast-growing, friendly town, and much of it shining new, but extremely wet and windy.

Captain Tysse addresses circulating rumours that a cyclone is on the way. “It’s coming from the other direction and we’ll be well gone, if it arrives at all.”

We hear nothing more about a cyclone.

Two days later we’re anchored off Thursday Island, or Waibene, in the Torres Strait archipelago between the Asian Arafura Sea and the Pacific’s Coral Sea. I have a beer at Australia’s most-northern pub and chat with locals.

“So you’re a Pakeha,” says one after he asks where I’m from. And: “You fellas got a useless league team.”

The pub patrons don’t seem too fussed about cruise ships stopping by.

But there’ll be five ships coming in this year, I learn when I stop to talk with artist Mary Ware at a tiny market along the road.

Each visit has significant and instant impact on the town’s economy but the locals have to get in the right mindset for it, she says.

Take today, it’s raining, and some people didn’t bother coming out to set up stalls. The business association will have to up its game, Mary shrugs.

Retired Great Barrier Reef pilot Captain Wel Gamble is on board the Journey and guides the ship through the Torres Strait’s reefs and currents.

We slip through the narrow Albany Passage, between the most easterly islands and the tip of Cape York. Everyone is on deck watching this slow progress through a passage ships seldom cross. In the dusk, on the Cape York side, two 4×4 vehicles roar through scrub and stop on a grassy patch about the size of a footy field above the cliffs. Out spill a dozen or so passengers, waving madly.

It is a beautiful, desolate, raw place, hundreds of kilometres from the nearest town and there’s not a building or man-made structure in sight. It’s surreal, and we all wave and wave.

The ship turns down the Far North Queensland coast, into the Great Barrier Reef leg of the journey. The sky and the sea turn blue. Over the next week we stop at Port Douglas, Cairns, Townsville and Hamilton Island in the Whitsundays. Passengers take trips to the reef or go ashore. They go to wildlife parks, see crocodiles, go shopping, admire tropical gardens, beaches (where the wet season’s stingers stop people from swimming), sultry mangrove rivers, cafes, museums and galleries.

During the 18-night voyage there has been a lively choice of entertainment – a little orchestra, a guitarist and different shows, comics, magicians and singers every night.
At Port Douglas, we have a traditional Azamara “White Night” deck party where the ship rocks ‘n’ rolls. At Cairns we are treated to an “Aza-mazing Experience”, a night of culture, music and tradition by the Tjapukai people.

The food is superb, the “complimentary” booze never ceases, and the crew is fantastic.

We are heading to Sydney and the end of the cruise. The night before we enter the harbour, the skipper announces there will be bubbly, juice and hot drinks for anyone on deck at 5.30am when the Journey slips past the Opera House and under the Harbour Bridge. Many guests get up for the occasion although the sun hardly rises high enough to light the sky as we berth. The sound of corks popping ricochets above the churn of engines, but the guests are quiet as they toast the end of the voyage on the very accommodating Journey.

The Azamara Journey is making her maiden voyage to New Zealand with a 16-night cruise. She will be in Auckland on March 6, in Napier on March 9 and Wellington on March 10.

Azamara Journey will make a 115-day world cruise spanning 61 ports and 29 countries, departing from Auckland on February 22, 2018 and arriving in London June 17.

It includes the opportunity to attend the Cannes Film Festival and Monaco Grand Prix.

There will also be sailings in 2018 for the World Cup in Russia, the Redentore Festival in Venice, a World War II Remembrance Voyage to Normandy and golf cruises in Australia, New Zealand and Europe.

Taiwan has reported a large incursion by Chinese warplanes for the...

PM Voreqe Bainimarama is encouraging parents to not to worry about...

WORLD NEWS: Separatists are consolidating control after taking over ‘Galapagos of...