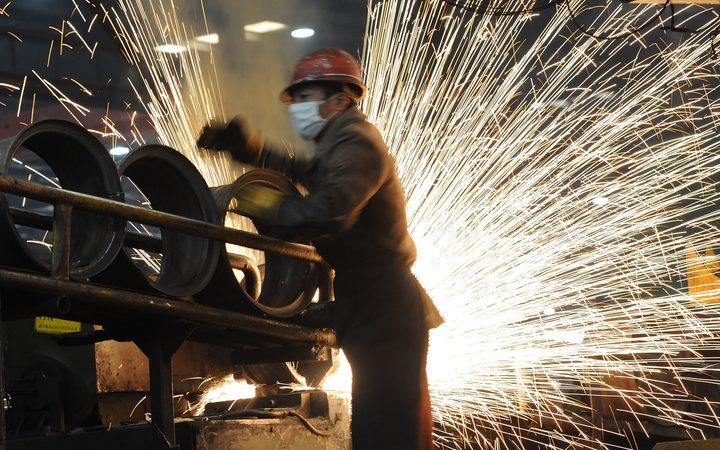 Updated: 6:26am – China has warned that it does not want a trade war with the US, but will not sit idly by if its economy is hurt.

Zhang Yesui, spokesperson for China’s National People’s Congress, made the comments amid controversy over Donald Trump’s announcement of tariffs on steel and aluminium imports.

The US president has also threatened to impose a tax on EU-made cars, and earlier said “trade wars are good”. US trading partners, the IMF and the WTO have strongly criticised his moves.

Mr Trump has decried the “$800 Billion Dollar Yearly Trade Deficit because of our ‘very stupid’ trade deals and policies”, and vowed to end it.

On Thursday, he said steel imports would face a 25 percent tariff and aluminium 10 percent, while he threatened to add tariffs on EU-made cars on Saturday.

In January, he had already announced tariffs on solar panels and washing machines.

China’s Zhang Yesui said it was natural that “some friction will exist” between the US and China, given the volume of trade between them surpassed $US580 billion last year.

But he said China would take “necessary measures” if its interests were hurt.

Canada said tariffs would cause disruption on both sides of the border. Prime Minister Justin Trudeau said he was “confident we’re going to continue to be able to defend Canadian industry”.

EU trade chiefs have reportedly been considering slapping 25 percent tariffs on around $US3.5b of imports from the US – targeting iconic American exports including Levi’s jeans, Harley-Davidson motorbikes and Bourbon whisky.

Brazil, Mexico and Japan, that have said they will consider retaliatory steps if the president presses ahead with his plan next week.

A number of Republicans have questioned the wisdom of the tariff proposal and have been urging the president to reconsider.

Industry bodies like the US Motor and Equipment Manufacturers Association have expressed deep concern. But steelworkers in Pennsylvania and Indiana will welcome Mr Trump’s comments.

The US imports steel from more than 100 nations and brings in four times more steel from abroad than it exports. Since 2000, the US steel industry has suffered, with production dropping and the number of employees in steel work falling.

The US is the largest export market for EU cars – making up 25 percent of the €192bn worth of motor vehicles the bloc exported in 2016 (China was second with 16 percent).

Why We Won? Baber Tells