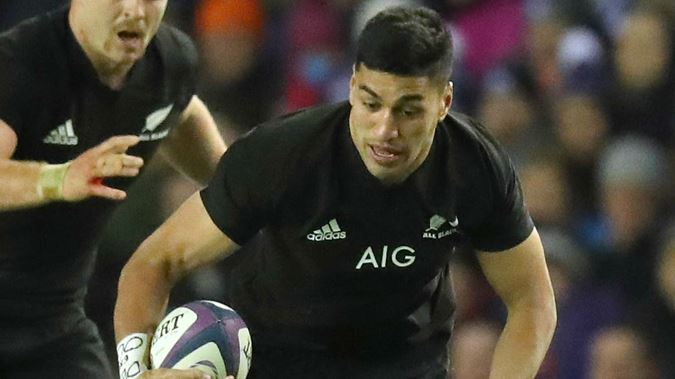 Updated: 7:10am – Seta Tamanivalu could make his test return on the left wing in Cardiff after a shoulder injury prematurely ended Rieko Ioane’s season.

Ioane has been outstanding for the Blues and All Blacks this year; his form culminating in dual nominations for World Rugby’s breakthrough and player of the year awards, the latter alongside Beauden Barrett, the former he seems odds-on to win.

The 20-year-old has scored nine tries in 12 tests, and was once again one of the All Blacks’ best in the tense 22-17 win at Murrayfield. He will stay on to attend the post tour World Rugby awards evening, but now miss the final test of the year against Wales after damaging the rotator cuff in his right shoulder.

“He’s the rookie and player of the year nominee for a reason he’s played really well so it’s an exciting challenge for someone else to step up and do that job,” All Blacks coach Steve Hansen said. “We’ve got plenty of people who can play on the left wing. I’ve got plenty of faith in the bloke we’re probably going to pick. He’s going alright so we’ll how he goes.”

But it will probably pave the way for Tamanivalu’s fourth test, and his first for 15 months after last featuring against the Wallabies in Wellington in August, 2016. Other options include shifting Waisake Naholo to the left and possibly handing Blues rookie Matt Duffie his test debut, or using Crusaders fullback David Havili on the wing.

Tamanivalu appears the favoured option. While he doesn’t possess nearly the same pace as Ioane, having shifted out from centre this season, his power is valuable. In his return to this level against the Barbarians at Twickenham he took his chance with ball in hand but received a few defensive improvements.

Crusaders lock Luke Romano is also done for the year – his foot issue (plantar fasciitis) ruling him out. While no formal confirmation has arrived from World Rugby, Hansen said Patrick Tuipulotu was cleared after being cited for his huge hit that knocked out the French No 8 in the mid-week match in Lyon.

The All Blacks went into the match at Murrayfield with no lock cover on the bench – Vaea Fifita slotting in there – Kieran Read for a period too – when Romano departed early in the second half. In this team at least, Fifita is not viewed as a long-term second-row option.

After sitting out the Scottish scare Scott Barrett and Tuipulotu should, therefore, both be well rested.

Barrett is probably favoured to start alongside Sam Whitelock, with Tuipulotu offering impact from the bench.

But, after his best performance in a black jersey against the French XV, Tuipulotu warrants serious consideration for a start.

Read’s hip flexor complaint is the only other on-going concern but Hansen declared his captain good to go for one final week.

Featured image: Rieko Ioane’s season is over after picking up a shoulder injury against Scotland. (Photo \ Photosport)