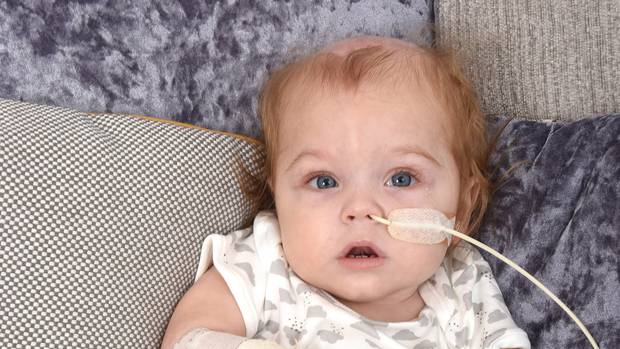 Brave Oliver Aisthorpe smiles as though he doesn’t have a care in the world – but just six weeks ago he lost all four of his limbs as he lay in hospital battling deadly sepsis.

The 11-month-old tot has made a miraculous recovery after doctors warned mum Abigail Wardle, 23, that her son wasn’t going to pull through.

And even after beating the infection, Abigail, from Lincolnshire in the UK, had to endure the horror of Oliver’s leg self-amputating and coming away in her hand as she held him in his hospital bed.

But now, just a few weeks on, Oliver is back home and making an incredible recovery – and medics even hope he could have his first prosthetic legs fitted in a few months.

Courageous Abigail has chosen to speak out about their sepsis hell in a bid to help other parents learn how to spot the signs of the killer bug – that little Oliver caught through an undiagnosed throat infection.

Abigail, a jewellery designer, said: “Some people might feel sorry for us but I feel like the luckiest mum in the world – I still have Oliver with us – he might not have any hands or feet but he is still my smiley, brave little boy.

“What we went through was horrendous and I had never been so scared in my life.

“But Oliver was so brave that I knew I had to be brave too. I am his mum and it’s my job to fight for him and make him feel safe.

“He went from laughing and giggling to death’s door within 48 hours and nobody knew what was wrong with him.

“I don’t want any other family to go through what we went through, and so I want everyone to be more aware of sepsis – families but also GPs, who sometimes don’t have the specialist paediatric training available to spot it.

“I want some good to come out of what happened to Oliver.” 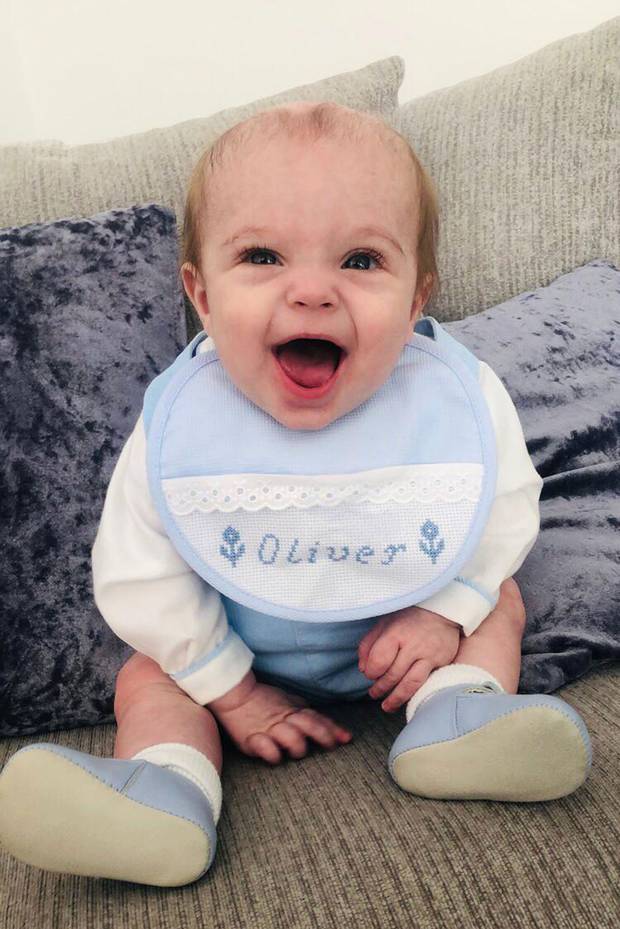 Abigail first took her son to an out-of-hours GP on Saturday, March 16, when she noticed his fontanelle – the soft area of a baby’s skull – appeared to be sunken and she worried he was dehydrated.

But she says a GP sent her home and told her to give him fluids and paracetamol.

But by the next day, he had deteriorated – and Abigail again took Oliver to see an out of hours GP.

When he arrived at the hospital, a nurse took one look at him and rushed him to resus, where a team of doctors began battling to save his life. 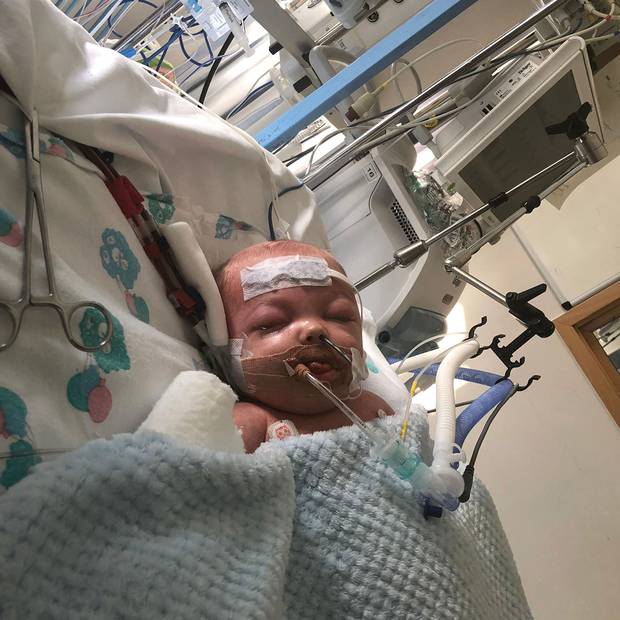 Abigail said: “Oliver had seemed a bit under the weather.

“But that night, he got more ill and seemed lifeless. When I moved him, it was as though his bones were aching.

“He quickly became very pale and lethargic and just wasn’t his usual self. I would cuddle him and he was groaning as though his bones were aching. He eventually stopped crying and was just whimpering, as though he didn’t have the energy to cry.

“I had just started him on solid food but he wouldn’t eat anything. He only wanted milk but barely drank anything.

“I knew he was not well and he needed to see a doctor but I didn’t have a clue that he could have had sepsis.

“My gut said he wasn’t right so I took him back to the out of hours GP and within minutes, a nurse had whisked him off and he was being put under anaesthetic.

“Everything was a blur. I still had no idea what was wrong with Oliver, I was just trying to hold it together as they were putting him to sleep.

“I could hear a doctor on the phone to another hospital asking how to treat Oliver.

“His hand and feet had started to go purple, and I just remember thinking he must be cold and telling them to put some socks on him.

“A doctor sat us down and said: ‘Your son is very poorly’, I just thought, I know that, he’s in a coma and hooked up to a load of machines, but I had no idea how ill he was.

“It was only when a nurse came over to speak to us and burst into tears that I realised how serious it was.

Doctors discovered that the sepsis had developed from an undiagnosed throat infection – which Oliver had never shown any symptoms of.

They managed to stabilise Oliver but warned Abigail that if he deteriorated they would not be able to save him.

She and Oliver’s dad were told twice that he was not going to survive, and they asked the hospital chaplain to baptise Oliver. 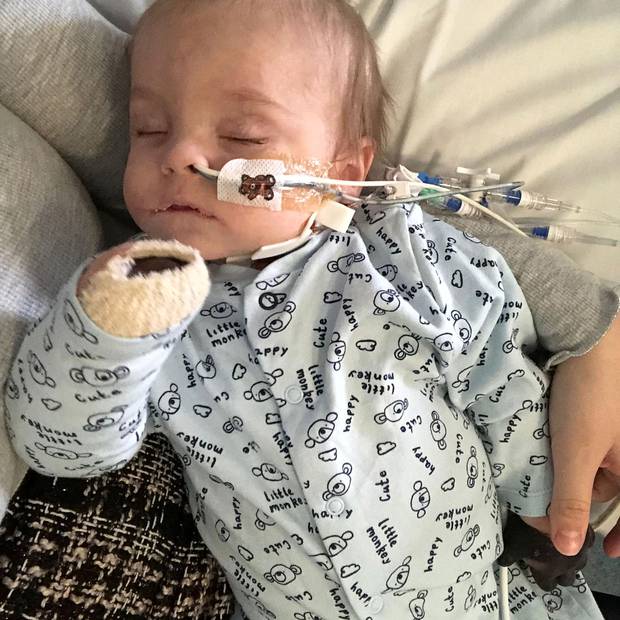 Incredibly, though, the little boy pulled through – and survived with no damage to his brain, but the sepsis has caused both his hands and legs to turn black and effectively die off.

Medics battled to save length in Oliver’s leg, but mum Abigail begged them to speed the operation along because she could see the leg self-amputating.

She said: “Oliver was out of the woods but they kept delaying a date for his amputations to try to save more of his leg – but I could see his body was trying to get rid of it.

“The limbs were heavy and uncomfortable – Oliver was miserable, I know it sounds like an odd thing for a mother to say but I was desperate for them to take them off.

“One day, a nurse was helping me lift Oliver from his bouncy chair back into the bed, and his leg just came away.

“The doctors came running in and asked me if I wanted to leave the room because it was quite distressing.

“I told them: ‘My son’s leg has just fallen off and is hanging on by a thread, I am not going to leave him here.’

“Once he had his limbs removed, he was like a different child – so happy and full of life, it seemed like a relief for him.”

Last month, Oliver was discharged from hospital and is now getting used to life without his limbs. 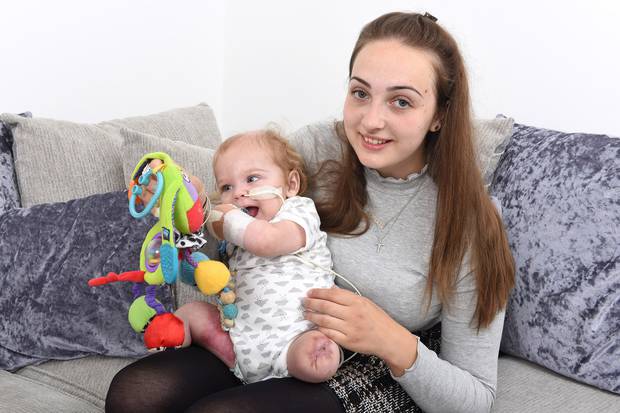 Abigail added: “I am just so proud of Oliver.

“He has taken everything in his stride and is just so incredibly resilient. He makes me smile every day. Already, he is trying to work out how to roll over and play with his toys with his stumps.

“I could have come out of the other end of this with no son, so that’s what I focus on. We have our bad days, but I know that there will be better days to come.

“I have to be positive because Oliver will copy me – it is my job to teach Oliver how to handle whatever life throws at him.

“It has happened and we just have to get on with it, but seeing his beaming face every day is enough to keep me going. I want his story to be used to help spread awareness and teach other parents and GPs who maybe don’t have specialist paediatric training, about the signs of sepsis.

“I had no idea how ill Oliver was but if he hadn’t gone into hospital when he did, he wouldn’t be here.”

Dr Ron Daniels, CEO of the UK Sepsis Trust’s CEO, said: “Oliver’s case reminds us that sepsis can strike at any age, with often devastating consequences. Sepsis is a notoriously difficult condition to spot, and to do so relies upon health professionals being alert to the possibility of sepsis in any patient who is deteriorating without a clear cause.

“Outcomes like Oliver’s can be prevented through better awareness of sepsis and by empowering our public to ‘Just ask: could it be sepsis?’.

“Survival rates for patients with sepsis have improved hugely over the last several years, with more than 80 per cent of people developing the condition surviving.

“For some, like Oliver, who are thankfully in the minority, amputation of limbs can become necessary. Most commonly, and as we saw in Jack Webster’s story in Coronation Street last summer, this is undertaken by surgeons in the operating theatre in a bid to control a secondary infection or to stop toxins released by the dying tissue further poisoning the body.

“In Oliver’s case, one of his limbs underwent auto-amputation. This is where the blood supply to a limb is so low that the tissues die, but without developing a secondary infection and without the release of toxins into the body.

“Health professionals then typically watch and wait to see how much of the limb will remain healthy, with the result that that part in which the tissue has died will ultimately fall off. It is unusual for this to be an entire limb, but is not uncommon in people losing fingers or toes.”