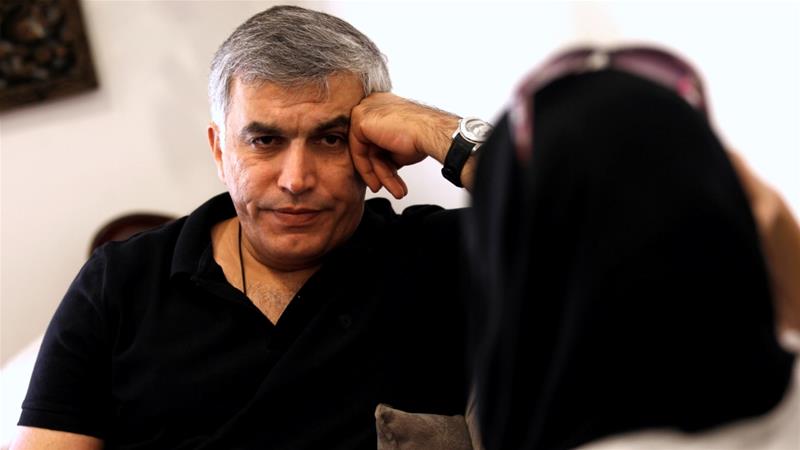 Update: 9:13am – The UN human rights office has called on Bahrain to “unconditionally and immediately” release rights campaigner Nabeel Rajab, who was sentenced to two years in jail this week.

Rajab, a leading figure in a 2011 pro-democracy uprising that was crushed by the government, was sentenced on Monday, supporters said, for allegedly making “false or malicious” statements about authorities.

“Human rights defenders in Bahrain must be able to carry out their work without fear of reprisals and should not face detention or prosecution for exercising their right to freedom of expression. Criticising the government should not be a crime,” UN human rights spokeswoman Liz Throssell told a Geneva news briefing on Friday.

“We note that Mr Rajab has been detention since June 2016. We call on the Bahraini authorities to immediately and unconditionally release him,” she said.

Rajab, 52, was sentenced in absentia as he has been hospitalised since April, said the Bahrain Institute for Rights and Democracy earlier this week.

It denounced the verdict, saying Rajab had been sentenced “for speaking to journalists” and that he had “spent over a year in pre-trial detention, largely in solitary confinement”.

“His lawyers state he was denied basic fair trial guarantees,” the group said in a statement.

Amnesty International also denounced the decision, saying it exposes a “relentless campaign” by authorities in Bahrain “to wipe out dissent”.

“Imprisoning Nabeel Rajab simply for sharing his opinion is a flagrant violation of human rights, and an alarming sign that the Bahraini authorities will go to any length to silence criticism,” said Amnesty’s Secretary-General Salil Shetty.

“Bahrain’s government and judiciary have once again tightened their chokehold on freedom of expression and branded him a criminal,” Shetty was quoted as saying in a statement.

The US state department has expressed concern over Rajab’s arrest and curbs on freedom of expression in Bahrain.

“We believe societies are strengthened, not threatened, by expressions of opinion and dissent, and that opposition voices can play a vital role helping societies become more tolerant and inclusive,” read a statement released by the US state department on Monday.

The US statement called for Rajab’s immediate release.

Rajab had been arrested multiple times in recent years over protests that the government said were unauthorised.

The activist was pardoned for health reasons in 2015 before being rearrested in June 2016.

He also faces trial for a series of tweets criticising a Saudi-led military campaign in Yemen, with a hearing due on August 7, according to the Bahrain Institute.

It said he faces up to 15 years if convicted in that trial.

Bahrain has been the scene of frequent protests and clashes with police since security forces quelled nationwide protests that called for political reforms in 2011.

Defense unhappy with the sedition charge

Chiefs hang on to outlast Blues