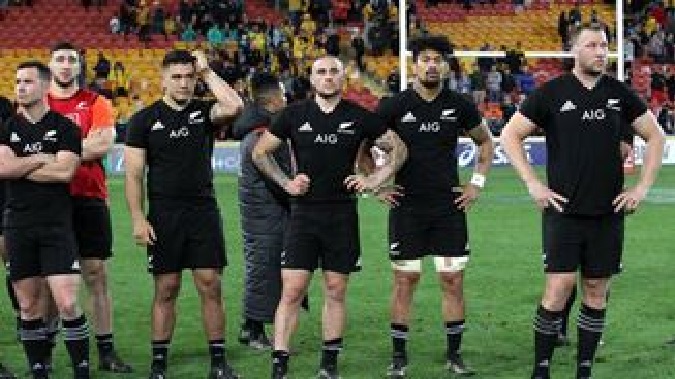 Updated: 6:38am – There is, perhaps, a whiff of vulnerability about the All Blacks as they touch down in London.

This has not been a vintage year.

Alarmist, maybe. But from a results perspective, the All Blacks are enduring their worst season in recent times. Only a slight dip is required when you set the bar so consistently high.

Prior to this year, the last time the All Blacks lost two tests in one season was 2011, when South Africa and Australia triumphed in succession just before the World Cup.

Only now, six years on, does one fully appreciate their sustained dominance.

Before 2011, you have to go back to the dire campaign of 2009, when there were three defeats to the Springboks – and one more against the French in Dunedin – during the dreaded experimental law variations caused serious angst.

Steve Hansen has lost only six tests since assuming the top job in 2012. That’s why the vast majority viewed the loss against the Wallabies in Brisbane as a blip.

Hansen has earned trust. But two defeats and a draw have now come in this testing season. Pressure is on to rectify results and finish with a flourish.

The calibre of the opposition must be considered when taking a critical view. The British and Irish Lions were a cut above anything the All Blacks had faced since claiming the 2015 World Cup. That memorable event will give those tourists belief and confidence.

Though not nearly as vaunted as individual nations, the Welsh and Scots may still feel this is a good time to strike.

On that front, context is important. The All Blacks are now missing seven world-class figures, forcing accelerated development of the next tier. Such advancement will pay dividends down the track – next year, when everyone returns, the All Blacks will be a scary prospect.

But, for now, growing pains are evident.

“One loss is too many,” All Blacks halfback TJ Perenara said. “We expect to win every time we run out on the field. We can’t change what’s happened in the past – we can’t change last week [in Brisbane] or the loss against the British and Irish Lions. All we can do is go forward from here.”

On face value, tests against France, Scotland and Wales do not seem drastically daunting. Not when it could be Ireland or England. But several difficult dynamics confront the All Blacks.

They have players coming and going, with Kieran Read, Sam Whitelock, Dane Coles and Sonny Bill Williams among those skipping the opening match.

Then there’s a midweek game in Lyon, and subsequently disrupted build-up to the Scottish assignment.

When the All Blacks reach Paris in the second week, their squad swells to 42 and will need careful management. Earlier this year, when senior players flew to Cape Town after resting the previous week, many did not perform at their peak.

Four rookies have to be integrated, and change extends to management, where Scott McLeod makes the transition to take on the defensive brief from Wayne Smith.

“When we get all the guys from the Baabaas, we’ll end up with over 40 people,” Hansen said. “We’re going to have to be well prepared, well managed. It’s the management that will have to work harder. We’re well aware of what we’ve got to do and how we’re going to do it.”

Northern Hemisphere rugby also usually requires a different approach. Conditions are often cold and wet. The two tests the All Blacks lost this year – in Wellington and Brisbane – were both in the rain, and their kicking game was found wanting.

Referees’ interpretations also take some adjusting – and there is a select set of new rules to get used to, the most notable at the breakdown, where the tackler must come back through the gate.

First up, it will be difficult to get a true gauge. The All Blacks who take on the Robbie Deans-coached Barbarians at Twickenham on Sunday morning (NZT) will be an experimental side littered with those on the fringe or new to the team.

Hansen believes this will create immediate competition within the squad.

“I think it’s harder for the Baabaas because in our team, everyone is trying to vie for test match spots.

“I was involved when the Baabaas played Australia and they really came out humming with their younger guys because they wanted to get into the test squad.

“Hopefully our younger guys will be the same. Talking to them this morning, they’re keen.”

Vulnerability isn’t necessarily a bad thing. It creates edge and keeps feet firmly on the ground. But this challenging year for the All Blacks is far from over. And this northern tour may not be as straightforward as some suspect.