Coach Anil Kumble has strongly denied that India will consider axing middle-order batsman and regular vice-captain Ajinkya Rahane after the disappointing loss to Australia in Pune.

Rahane came straight back into the team after being out injured replacing Karun Nair who struck a triple century on a deathly flat track in the fifth Test against England. 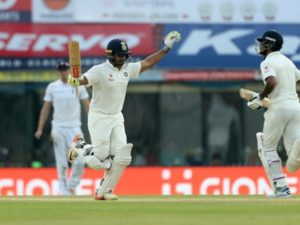 The size of Nair’s score coupled with patchy form from Rahane caused many to question the decision to bring him back in but Kumble has supported the diminutive right-hander.

The coach feels that dropping Rahane would be a knee-jerk reaction and is not in the best interests of the side in the long term.

Kumble told a press conference: “I think there’s no question of looking at dropping Rahane.

“He’s scored really well, he’s been extremely successful over the last couple of years. There’s absolutely no question about that. In terms of the team composition, we still haven’t discussed on that. All 16 are available.

“It’s unfortunate that Karun has missed out after he scored that triple-hundred. That’s the way the composition of the team has been where we’ve looked to play five bowlers and you know it’s unfortunate.

“He came in as a replacement [for the injured Rahane during the series against England]. It’s really nice to have those kind of choices in the team where people have been successful in a group.

“And this group has been, like I mentioned before the first Test or even against Bangladesh where Karun couldn’t make it, that’s the beauty about this group where whoever comes in has done really well.

“Yes, they’ve been left out, there have been times where people have had to be left out because of combinations that we go with. But everyone is available. It’s unfortunate for Karun but he’s one class act and you’ve seen that in the short international opportunities that he’s got.”

Kumble insisted India would not be rushed into making changes out of panic after losing the first Test of the series but did indicate they may make some tactical switches.

India lost the first Test by 333 runs in a series many were expecting them to sweep and will be eager to put the minds of their billions of man’s at ease when the second Test gets underway in Bangalore on Saturday March 4.

FIJI NEWS:- Man in critical condition after head on collision