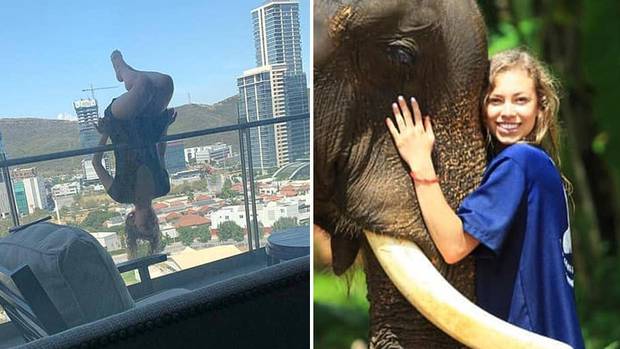 A 23-year-old woman has survived a fall of 80 FEET after slipping while performing an extreme yoga pose on a balcony railing.

Alexa Terrazas was posing for photographs while attempting the stunt, before slipping and falling from the balcony of her sixth-floor apartment.

The tragedy occurred in the Mexican state of Nuevo Leon on Saturday and a photograph has gone viral showing Terrazas balancing seconds before she fell.

It shows the college student supporting her entire weight on the railing, her head pointing toward the ground 80 FEET below.

Emergency services responded, treating her at the scene before she was rushed to a local hospital where she battled through a gruelling 11 hours of surgery.

She remains in a critical condition with fractures to all four of her limbs as well as to her hips and skull.

Mexican news outlet El Imparcial have reported that Terrazas might not walk for three years after doctors reconstructed her legs.

An investigation from the Nuevo Leon attorney-general’s office found no structural failings in the balcony.

FIJI NEWS: 500 workers from Jacks have been laid off from...